An impact layer near Grabenstätt

On the eastern outskirts of Grabenstätt village, an exotic rock layer was temporarily exposed in two excavations over an area of more than 100 m² (Fig. 1). The layer is completely strange compared with the here well-known Pleistocene and Holocene sediments. The layer at a depth of roughly 0.8 m is several decimeters thick and shows a complex structure. It is underlain by coarse-grained gravels composed of hard and well-rounded cobbles (Fig. 2). At the base of the impact deposit itself there is a layer of brownish to black colored material composed of fragmented and strongly corroded Alpine cobbles in a clayey, sandy and marly matrix (Figs. 2, 3, 4). In parts, the black color is reduced revealing the polymictic, breccia-like character of the deposit (Fig. 5). The most peculiar feature is the extreme corrosion of many cobbles that has affected all lithologies (limestones, sandstones, quartzites, metamorphic and magmatic crystalline rocks) (Fig. 6 A-D). Frequently, the rock dissolution leads to skeletal relics due to the resistance of quartz dikelets within the cobbles. Lots of crystalline rock components show complete disintegration, and abundantly they are found in situ reduced to a heap of mica. Gneiss cobbles as big as a fist can be squashed with the bare hand.

More solid cobbles show that the black coating cannot be wiped off and that partly an impregnation of the cobbles has occurred. Preliminary mineralogical-petrological analyses (X-ray powder diffractometry) have established graphite to contribute to the black matter. In one cobble, planar deformation features (PDFs) in quartz as indicative of shock have been identified. More studies are currently done.

The layer displaying the strong corrosion is overlain by a polymictic, breccia-like layer composed of predominantly small-sized, frequently sharp-edged fragmented components (Fig. 7). This layer is roughly divided into two comprising an upper part where the components are slightly more rounded. In the uppermost part, a gravelly layer again darker colored follows (Fig. 8 ) where, beneath the top soil, substantial amounts of ferrosilicides (gupeiite and xifengite included) were detected.

The formation and deposition of the described exotic layer and its material require an explanation that is hardly or not at all compatible with geologic processes in the Pleistocene and Holocene. This concerns the small-sized brecciation of the Alpine cobbles, the continuous extreme corrosion up to complete disintegration of even silicate rocks throughout the horizon, and the find of graphite in the black coating of the cobbles. A deposition in connection with the Chiemgau impact event, probably in parts as ejecta from the Lake Tüttensee crater, seems to be a reasonable hypothesis. Within the frame of such an impact model, the polymictic, breccia-like layer of small-sized fragments is most easily understood, because breccias of quite different kinds are formed in every impact and because they basically contribute to ejecta deposits.

The origin of the graphite is not nearly as well understood. In general, graphite forms the end of the co-called carbonification row comprising lignite, hard coal, anthracite and graphite with increasing temperature and pressure in the earth’s crust. Moreover, graphite is formed in higher stages of rock metamorphism when sedimentary rocks containing organic material get exposed to higher temperatures and pressures. The graphite coating the cobbles in the Grabenstätt impact layer cannot possibly be derived from these processes, and a delivery with the impact seems to be most probable. Both a formation in the impact explosion and being primary cosmic matter must be taken into consideration.

The extreme corrosion up to complete disintegration of the rocks may be related with a process that has so far not been observed directly with impacts but that can give a rather plausible explanation. In impact research, it is generally accepted that large quantities of acids may be produced in the giant impact explosion cloud. While hydrochloric and sulphuric acids are derived from impact-affected chemical sedimentary rocks (chlorides, sulfates) , nitric acid involving atmospheric nitrogen is assumed to be produced in very large quantities enabling large quantities as well to precipitate after the impact. Being extremely aggressive, nitric acid attacks also rocks as is well known from geochemical analytics and respective nitric-acid extractions.

It is suggested that exactly this process happened during the Chiemgau impact event: the formation of large quantities of nitric acid in the giant explosion cloud of the proposed comet, followed by a precipitation down to the rocks exposed to disintegration.

If we are right, then for the first time the effects of the theoretically proposed nitric-acid production can actually be observed in nature. We have begun to perform respective experiments on the dissolution of Alpine rocks by nitric acid.

So far open to discussion is the “schedule” for the deposition of the various units of the impact layer. Short-term reworking, tsunamis, multiple impacts (probably also into Lake Chiemsee), selective nitric-acid dissolution, and effects of later catastrophic rainfalls initiating further tidal waves must be taken into consideration when modeling the event. 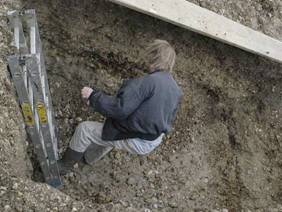 Fig. 1. The excavation near Grabenstätt exposing the impact layer. It is interpreted as ejecta from the Lake Tüttensee crater. 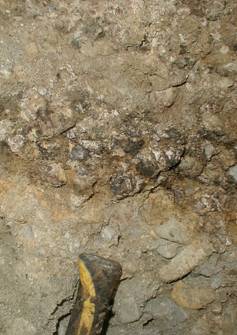 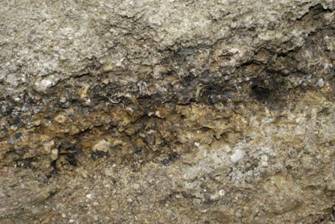 Fig. 2. Various aspects of the graphite-bearing horizon in the impact layer. Note (in particular in the first image) beneath the dark impact horizon the normal gravel deposit composed of completely unchanged, solid and well-rounded cobbles. 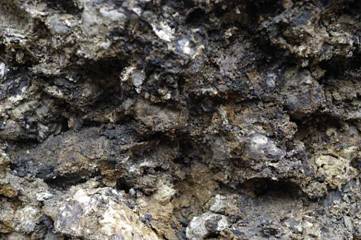 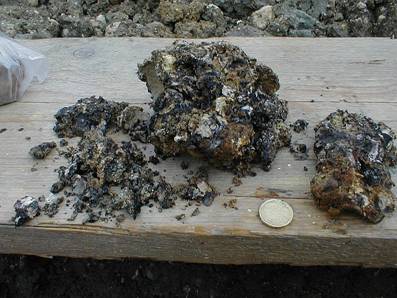 Fig. 4. Samples from the impact horizon for mineralogical-petrological investigations. 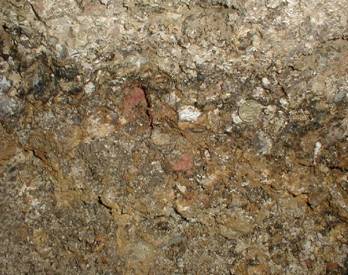 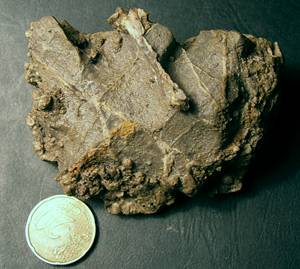 Figs. 6 A -D. Strongly corroded components of different lithology from the impact layer. The corrosion is explained by the dissolution of the rock material from nitric-acid precipitation. 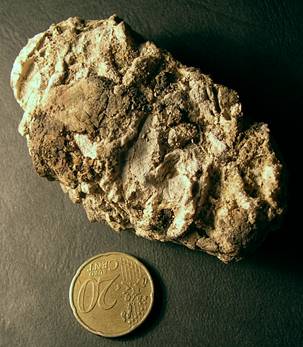 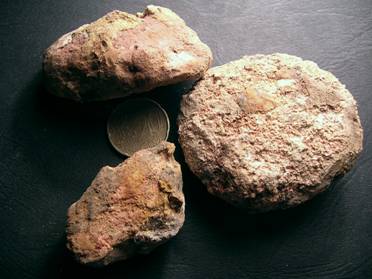 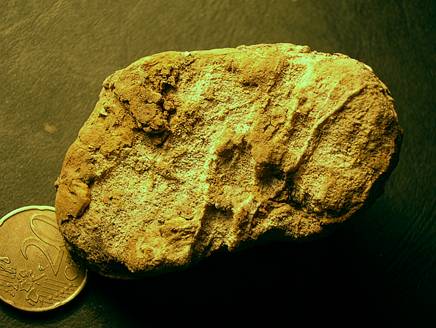 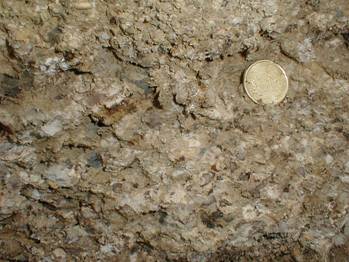 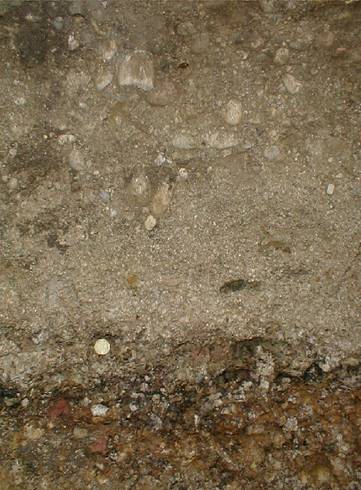 Fig. 8. In the top: Gravelly layer overlying the graphite-bearing horizon and the polymictic, breccia-like horizon with the small-sized components. The gravelly layer is full of ferrosilicides included gupeiite and xifengite.