— Several craters have meanwhile been investigated more closely by trench and pit excavations, by topographic surveys and by geophysical measurements having revealed a distinct anomalous geomagnetic signature.

3 SEM images from the peculiar iron silicide material (particle in the left image).

The melt rocks may be confused with pumice-like slag from former iron smelting, or they are simply overlooked by geologists. In thin section the material is completely void of ore or iron particles, and shock metamorphic effects underline the impact origin. From the mineral composition the source material of the melt rock is supposed to have been Lake Chiemsee clay sediments exposed below and around the lake. 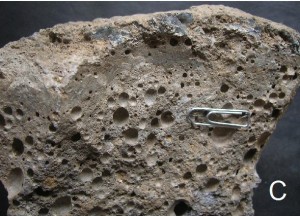 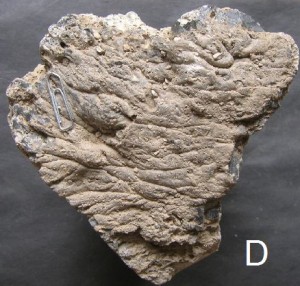 Also, typical true pumice has been found around Lake Chiemsee which is in more detail described HERE. 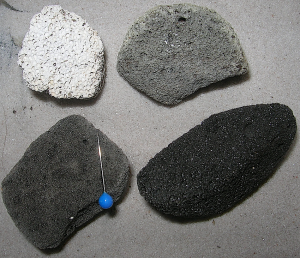 Only a few craters have so far been examined in more detail. A study of some hollows by digging vertical trenches through them reveals the typical bowl-shaped profile (e.g., Fehr et al. 2005) well known from meteorite craters of comparable size. Ground penetrating radar (GPR) measurements in an exemplarily studied crater (Hoffmann et al. 2005) reveal the bowl shape to continue to depth implying a strong radar reflection from the crater floor.

The majority of the craters have clear walls, with a steep gradient inside towards the center and a flat one outside. On aerial photographs (partly taken in infrared light), the zone of ejecta around some craters becomes visible (Fig. 1). Often, the craters show a slightly asymmetrical, mostly elliptical form. 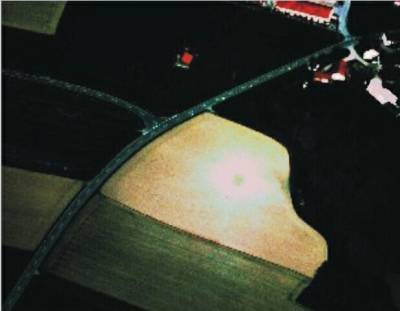 Fig. 1. A 15 m-diameter crater near Perach. The photograph, after some image processing,  shows a distinct zone of ejecta partly exhibiting a radial pattern. Aerial photo: Bay.LfD.

The gravel in the center of the crater is sharp-edged broken and looks basically different compared with the usually well-rounded pebbles found in the landscape (Fig. 2).

Fig. 2. Typical material sampled from crater floors (to the left) strongly contrasting with target material from outside the craters.

The material constituting the crater rim walls frequently shows extremely affected mechanically and thermally, which is discussed in more detail in a special section. Hoffmann et al. (2005) are describing a crater where the rocks, throughout the whole rim wall of 20 m diameter, have experienced temperatures exceeding 1,500°C.

Near to the main craters, a prominent kind of secondary cratering can be observed. After removing the upper soil layers down to a depth of about 0.5 m, sharp-edged rock fragments sized 0.2 – 0.3 m occur to be stuck in the otherwise untouched ground. They are surrounded by a striking ring-shaped discoloring of the host material up to the diameter of 1 m (Fig. 3). Secondary cratering means, that the blocks were probably ejected ballistically from the main crater und impacted the ground upon landing.

Peculiar metallic material  (Fig. 4) is accumulated  around all the craters at a certain depth, 0.3-0.4 m below the top soil. Occasionally, it has penetrated the target gravels. In majority, it is found concentrated northeast of each crater, while with increasing crater size the distance increases, too. 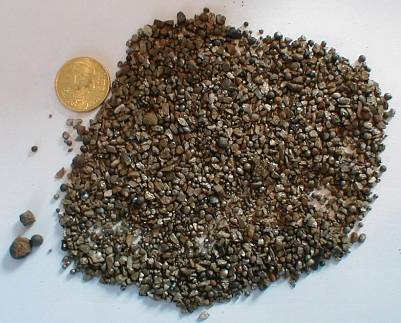 Fig. 4. Fine fraction of peculiar metallic material concentrated near the large Bergham crater. Note the many perfect spheres contributing to the material.

Ferrosilicides (FeSi, gupeiit Fe3Si, xifengit Fe5Si3) are found distributed over a much larger area of about 3,000 km² besides the corridor set by the strewnfield. Following, from north to south, the major axis of the scattering ellipse, the material is traceable in the promontory of the Alps south of lake Chiemsee up to an altitude of 1,200 m.