— The anomalous soil magnetic susceptibility signature measured by Hoffmann et al. (2004, see below) in the very north of the strewn field has meanwhile been verified also by the CIRT near Lake Tüttensee crater in the Marwang forests. From new geomagnetic field surveys and additional magnetic susceptibility measurements an anomalous magnetic behavior of the soil and upper layers is widely observed in the crater strewn field. A report has been submitted for publication. 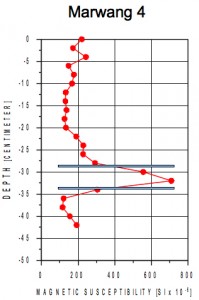 — Seismic sediment echo sounder measurements have been performed across the Lake Tüttensee crater by geographers of the University of Jena. A reinterpretation of the data made available to the CIRT in an unpublished report show that the true meteorite crater, completely in accordance with the data of the gravity survey, does not correspond with the lake extent but has a somewhat smaller diameter. The seismic measurements also show that the lake bottom is completely different from what is expected for a “classic” lake in the post-glacial landscape of the Alpine foreland thus once again dismissing the theory of a dead-ice kettle still claimed for the formation of the Lake Tüttensee crater by local and regional geologists. Moreover, from the seismic results it is evident that the drill core taken by geologists from the Bayerisches Landesamt für Umwelt (LfU) for radiocarbon dating of Lake Tüttensee sediments represents a completely normal stratigraphy outside the very crater. Hence, the boastfully propagated message of the LfU that the radiocarbon dating has “killed” the impact hypothesis was all for nothing. 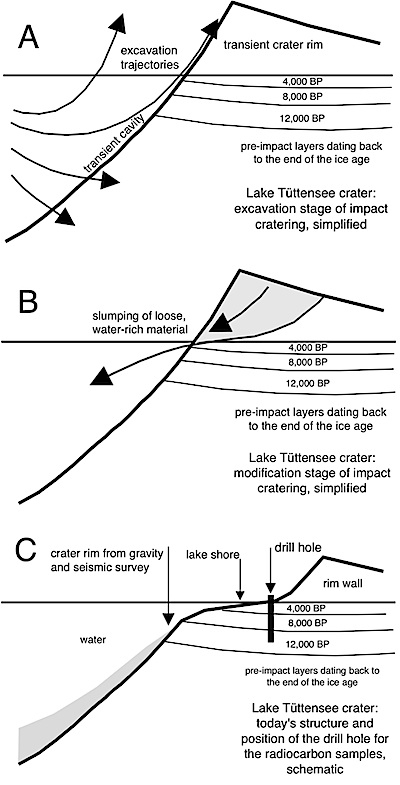 Early geophysical earth magnetic field measurements (Fehr et al. 2002) across smaller craters revealed faint anomalies that could not be related with definite causative bodies so far. Meanwhile, more geomagnetic measurements have been performed in an exemplarily studied 11 m-diameter crater (Hoffmann et al. 2005) showing significantly enhanced magnetic susceptibilities compared with rocks from the surroundings. Moreover, strong magnetic dipole-like anomalies have been mapped matching well own observations: Outside the craters, the abundant occurrence of strongly magnetic rocks of quite different lithologies among the target rocks is conspicuous. The high, dominantly remanent magnetization seems to be unusual compared with typically magnetic rocks from the Alps (e. g., amphibolites, serpentinites). We suggest that these rocks might have acquired their magnetization as a thermoremanent magnetization in contact with the super-heated impact explosion cloud. More detailed investigations are required.

Soil magnetic susceptibility measurements in the Burghausen area within the so-called 1,000 years old forests (Hoffmann et al. 2004) also reveal substantially increased susceptibilities. A relation of these anomalies (comprising a maximum at depth and not at the surface) with industrial or geologic processes is basically excluded (Hoffmann et al. 2005). From our point of view, these susceptibility anomalies originate from the gupeiite and xifengite magnetic phases widely distributed in the undisturbed soil and deposited in the course of the impact process.

Preliminary pulse-electromagnetic soundings across a 20 m-diameter crater show a signature of larger metallic objects at depth in the center of the structure. A human contamination may of course be responsible and, therefore, a closer inspection is required. 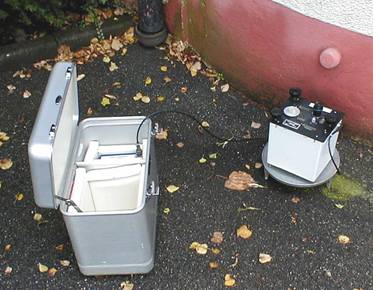 A gravity campaign (Fig. 1) was conducted on the frozen Lake Tüttensee and in its surroundings. A remarkable result is hardly compatible with the previous assumption of a dead-ice origin of Lake Tüttensee. The complete article about the campaign (in German with English abstract and figure captions) may be clicked HERE.