— As with dating problems in other disciplines like early history, archeology or geology, dating the Chiemgau impact event has proved difficult, inconsistent and not unambiguously settled hitherto. Undisputedly, a lower limit is provided by artifacts from the Bronze Age below and intermixed in catastrophic impact layers. Documents of Roman settlements at impact sites (Lake Tüttensee crater rim wall, Chieming-Stöttham impact layer) and extensive settlement relics from the LaTène era in the strewn field undoubtedly set an upper limit to roughly 300 B.C. Efforts to narrow down the time span in between by applying physical dating methods (OSL – optically stimulated luminescence, radiocarbon) and dating archeological artifacts have been undertaken but are still subject for discussion. A few absurd radiocarbon ages and a disputable complete resetting of the OSL “clock” in the Chiemgau impact event are underlining that possibly misleading ages of physical dating may be related with the impact process itself as has been discussed previously.

Historical aspects – or when was the sky falling? (original contribution)

A precise dating of the Chiemgau impact is so far missing. However, indications from various disciplines of humanities and natural sciences enable to narrow down the impact event within a time-frame.

• Numerous craters are located in an area having been covered by the Chiemgau glacier during the Pleistocene glaciation. Their in many cases excellent preservation proves that they were formed after the end of the glaciation, that is some 15,000 years ago when the retreat of the glaciers began.
• There are indications that an artificial graben-wall system, the so-called “Laubergraben”, is superimposed by one of the impact craters (Fehr et al., A meteorite impact crater field in eastern Bavaria? A preliminary report, Meteoritics & Planetary Science 40, 2005, no. 2, 187-194, here: 190). In this case, a lower limit for the time of the impact is given by the construction of the building. Purpose (irrigation system or fortification) and age (12th century, roman origin, or late Urnfield culture (~1000 – 750 B.C.), however, are controversially disputed. Therefore and provided the crater actually superimposes the building, the impact very probably occurred after 1000 B.C. The already mentioned excellent preservation of several craters also does not speak in favor of an earlier event.
• From the find of Roman archaeological objects dated 2nd century A.D., it is suggested that the craters already existed at that time: On the rim wall of the Lake Tüttensee crater (Fig. 1), a key (Fig. 2) and Roman coins were detected, aside from a Roman gravestone (Fig. 3 – meanwhile destroyed or got lost). In crater 008, a trefoil-like object once having decorated a Roman habit was found. Consequently, the craters must have formed before the 2nd century A.D. This is substantiated by a radiocarbon dating of charcoal from another crater (Fehr et al. 2005, 192) revealing an age of 1,790 + 60 years B.P. corresponding with the 2nd/3rd century A.D. Moreover, it is expected that the Romans if they were eyewitnesses of the impact, would have documented this catastrophic event, which obviously is not the case. Therefore, and with regard to the distinct presence of the Romans in the Chiemgau area, the impact must have happened before the beginning of the Roman occupation, that is before 15 B.C.
• In his work “Geography”, the Greek geographer Strabon (~ 63 B.C. – 23 A.D.) referring to a coeval source, reports on a visit of a Celtic legation to Alexander the Great: “And Lago’s son Ptolemaios narrates that during the campaign at the Adriatic sea the Celts had an encounter with Alexander in order to contract hospitality. After a friendly acceptance, the king had asked them during the carousal what they were most afraid of – assuming they would have answered: him, Alexander. Instead, however, they had answered NOTHING UNLESS THE SKY WOULD FALL ON THEIR HEADS; …” . In general, this has been interpreted as an anecdote to illustrate the fearlessness of the Celts. With regard to the Chiemgau impact event, we offer a possible alternate interpretation: For the shocked region, the impact must in fact have resembled the collapse of the sky resulting in a respective tradition. Thus, the Celts on their visit to Alexander did not point to a possible catastrophe in the future but reminded of a real event in the past that could recur anytime. The encounter with Alexander the Great took place in the year 335/334 B.C. If our interpretation of the collapsing sky applies, then the impact must have occurred before 335 B.C.

Summarizing the so far discussed limits, a time-frame for the Chiemgau impact focuses on 1,000 – 335 B.C. A recent thermoluminescence dating of a crater cobble coated by a nanodiamond-bearing glass crust (pers. com. Dr. B. Raeymaekers) revealed an age of 300 B.C. + 200 years. Therefore, a date for the impact between 500 and 335 B.C. is most probable at this stage. 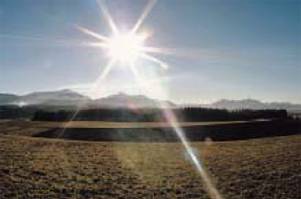 Fig. 2. An extraordinary find from the rim wall of the Lake Tüttensee crater: The key with a knob in form of a sculptured and nicely ornamented panther has been dated the 2nd century A.D. 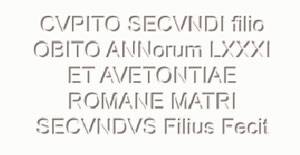 Fig. 3. An 18th century report witnesses a Roman gravestone on the rim wall of the Lake Tüttensee crater. Inscription: (The gravestone was) Made for Cupitus, son of Secundus, deceased at 81, and Avetontia Romana, the mother, by Secundus, the son. From: August Obermayr, Römersteine zwischen Inn und Salzach, Freilassing 1974.

There are two questions regularly asked in connection with the chronological placement of the impact. Are there written sources reporting on the event? What was the radius of significant effects, and did they influence the culture at that time?

Unfortunately, apart from Celtic inscriptions, the Urnfield, Hallstatt and Latène cultures that predominantly had formed the region under discussion, did not leave written evidences. Eyewitness accounts are therefore not to be expected. Possibly, ancient-world authors have noted phenomena as remote effects of the impact (stony rains, conspicuous glow) that were observed in the present-day Italy or on the Balkans. To reliably relate those reports with the Chiemgau impact, a more precise dating is required, however.

It is similarly difficult to make statements about the population density at the time of the impact and about the dimension of its effects. How many people were living in the affected region? What was the radius of the strong impact-related phenomena like earthquake shattering, blast waves, glowing clouds? Was there a cultural break, perhaps a complete desolation of the affected region for a long time? Was, on the other hand, the region sparsely populated only, without any distinct cultural changes? Did the impact affect the climate? 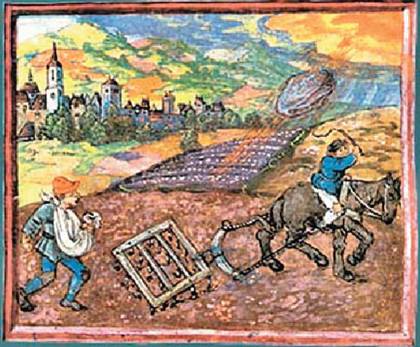 Fig. 4. The fall of a big meteorite (original mass ~ 127 kg) near Ensisheim, Alsace, on November 7, 1492 (from: Luzerner Bilderchronik 1513). It was called the “Ensisheim thunderstone”. Palais de la Regence, Ensisheim. 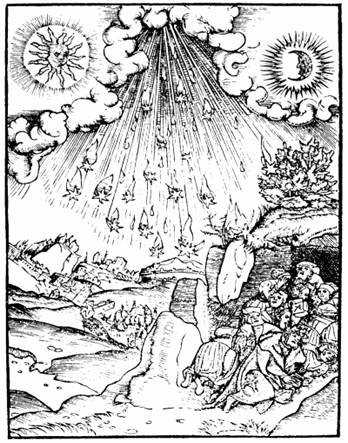 Fig. 5. “Wenn der Himmel mit seinen Sternen auf die Erde fällt” [“When the sky and the stars are falling down to Earth”]. – Engraving by Lukas Cranach (1522) related with the second vision of the ” Seven Seals” from John’s apocalypse: The stars are falling as flaming rocks from the broken sky darkened by clouds, earthquakes released by impacting meteoritic fragments are shaking the towns and cause buildings to collapse. The men, freaked out, are sheltering in caverns seeking protection in some way. 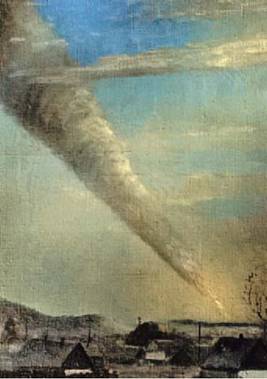 Fig. 6. This painting by P.I. Medvedev shows the impressive fall of the Sikhote-Alin bolide in the morning of February 12, 1947. The iron meteorite broke into a cascade of fragments (total mass of about 200 tons) that produced the largest meteorite shower ever observed. The painter happened to look through the window when he saw the terrifying natural spectacle and quick-wittedly took hold of the brush to document the event. Copyright: Dr. Michael Peteav, Smithsonian Astrophysical Observatory. 39.

The difficulty to get insight into the very effects of an impact is best demonstrated by the data and reports on the explosion of a celestial body over the Tunguska in Siberia (Russia) in 1908. The object, according to the most accepted hypotheses an asteroid or a comet, exploded in estimated 5 – 14 km altitudes. Trees were charred and flattened across an area up to a radial distance of about 30 km. The tents of reindeer nomads were torn off or burned to ashes, likewise their animals. People swirled through the air and blacked out. However, the death count was only little. From a settlement some 65 km distant, the residents reported an insufferably burning heat. Windows and doors were broken and pushed down. At distances of many hundred kilometers atmospheric glow and strong ground motions were recognized. Ash and other particles were blown into the atmosphere and distributed worldwide, and in the northern hemisphere, people were amazed about bright nights following the bang.

Thus, in the case of the Tunguska event, only faint cultural effects in a sparsely populated region on the one hand are associated with phenomena to be observed on a global scale, on the other hand. At present, we are unable to state whether the Chiemgau impact yielded a similar combination or whether the event was the catalyst of archaeologically comprehensible cultural changes.