From these top-quality analyses it is clear that at least a prominent part of the iron silicides from the impact strewn field can no longer be attributed to any industrial processes what has been hastily claimed by an obviously only cursory analysis (K.T. Fehr, R. Hochleitner, S. Hölzl, E. Geiss, J. Pohl, and J. Faßbinder: Ferrosilizium-Pseudometeorite aus dem Raum Burghausen, Bayern. Der Aufschluß, 55. – 2004. – P. 297-303. [Ferro-silicon pseudo-meteorites from the Burghausen, Bavaria, area.]

Also an updated report on the iron silicides by Prof. Uli Schüssler (http://www.uli-schuessler.de/eisensilizide.html), obviously no longer adhering to his former research on the Chiemgau impact (see the following contribution) and even having eliminated respective publications from his publication list, fixates on an industrial origin.

A short impression of the new SEM and TEM results is given by a Lunar & Planetary Science Conference abstract article that my be clicked here:  http://www.lpi.usra.edu/meetings/lpsc2011/pdf/1391.pdf

Images taken from the LPSC article.

Since the first Astronomy online publication on the “Chiemgau comet”, and the first comprehensive internet article (Rappenglück et al. 2004), an extensive program of mineralogical, petrological and geochemical investigations and analyses of rocks and material from the strewnfield and its surroundings has been performed. The work (thin-section petrography, microprobe and x-ray analyses, SEM analytics, etc) has primarily been done at the Institute of Mineralogy, University of Würzburg, and subordinately at Carl Zeiss SMT, Oberkochen.

Beside rocks and material specifically sampled by CIRT, a large number of specimens found in the field and supplied by interested people were analyzed. Not all samples have so far led to conclusive results, and a few require further studies.

A complex so far studied in great detail comprises the lithologically varied, mechanically and thermally strongly affected cobbles from craters in the northern part of the impact strewnfield (Fig. 1, 2, 3). 17 samples have been analyzed by thin-section inspection and microprobe (Institute of Mineralogy, University of Würzburg). The cobbles from the moraine and gravel sediments represent common rocks from the Alps like quartzites or basic metamorphic rocks. Thin sections show clear shock metamorphism from high pressures and temperatures. We observe multiple sets of planar deformation features (PDFs, Fig. 3) in quartz and feldspar, diaplectic SiO2 glass and extreme subgrain formation. Abundant tensile fractures, open or filled with glass, within the cobbles and also in individual quartz grains point to spallation induced by dynamic shock pulses. Melt glass is in general found in three different occurrences: as a thin crust in many cases completely coating the cobbles, as vesicular, partly recrystallized feldspar glass interspersing quartzite rocks, and as allochthonous melt lumps fused to the cobbles’ surface.

Fig. 1. Cobble from crater 004 completely coated by glass (to the left). To the right: close-up. The colorless to greenish glass contains numerous tiny vesicles. The field is 22 mm wide.

The glass coating is assumed to have been formed on entering of excavated and ejected cobbles into the superheated explosion cloud. As the glass is considerably enriched in K and Na practically absent in the studied cobbles, an intermixing from burned-up or vaporized vegetation must be taken into consideration.

Fig. 2. To the left: Cut surface of a thermally shocked quartzite cobble from the 11 m-diameter crater 004. Note the dark ribbons of partly recrystallized feldspar giving a gneiss-like appearance to the rock. To the right: close-up. Dark and colorless feldspar glass along with light quartz grains. The field is 3 mm wide. 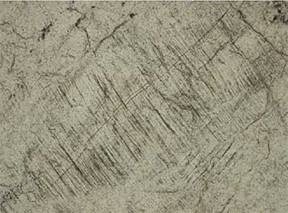 Fig. 3. Two sets of planar deformation features (PDFs) in quartz establishing shock metamorphism. From a cobble in crater 004. The field is 1.5 mm wide.

The field observations and the lab analyses basically exclude any normal tectonic processes and human activities but clearly speak in favor of meteorite impact. A detailed report on these investigations (in German, with English abstract) may be clicked here: Petrography.

More evidence of high temperatures is given by white, low density, highly porous carbonate clasts (Fig. 4). We suggest them to be the crystallization product of a carbonate melt from the melting of limestone cobbles. Very similar vesicular carbonate material to be also relics of carbonate melt is reported for the Azuara and Rubielos de la Cérida impact structures (Ernstson & Claudin 2002; also see Grieve & Spray 2003). Different from silicate rocks, carbonates may melt but cannot be chilled to form glass. Instead, upon cooling, the melt rapidly crystallizes to form again carbonate (calcite, aragonite) typically indicated by the occurrence of dendritic crystallites. In the white carbonate clasts described here, relics of calcite crystals may show microtwinning which is assumed to be also a shock effect (Metzler et al. 1988, and references therein). Below, we discuss such highly porous carbonate clasts to be peppered with splinters of ferrosilicides. 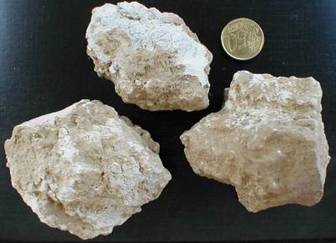 More strange material extended over the area of the crater strewnfield and a surrounding halo (altogether an area of about 3,000 km²) comprises metallic matter of very different size, shape and composition originally having put the discoverers onto the right track.

The particles up to the size of 10 cm, but in general only minute down to the fraction of fine sand, are found without any oxidation traces, have a density of 6.3 g/cm³ and a Mohs hardness of 6-8. Aerodynamically sculptured and “splash” shapes (Fig. 5) are abundant.

Fig. 5. Typical shapes of larger particles of the metallic ferrosilicides.

In the analyses, the particles prove to be ferrosilicides, FeXSiY, with varying iron-silicon ratios containing various inclusions, among them TiC (titanium carbide), alpha-iron and AlXSiY.

The FeXSiY material finely intersperses also carbonate clasts (Fig. 6) assumed to have originated from a carbonate melt (see above). 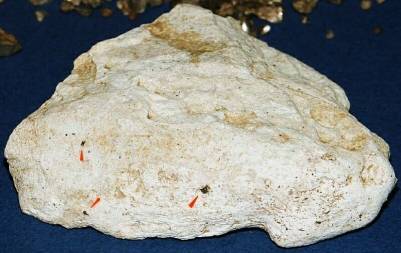 For early studies, this very peculiar metallic matter, obviously closely associated with the craters of the strewnfield, was sampled in and analyzed for the northern part of the strewnfield only (Beer et al. 2003, Raeymaekers & Schryvers 2004, Schryvers & Raeymaekers 2005). Meanwhile, a new investigation of samples from locations in the complete strewnfield, including finds at 1,200 m altitude in the first mountain chain of the Alps, has been performed at the Institute of Mineralogy, University of Würzburg.

The gupeiite and xifengite minerals were unambiguously identified by X-ray powder diffractometry (Fig. 11). The possibility of an industrial origin for the ferrosilicides and the titanium carbide is lengthily discussed here:
Discussion of alternate models. 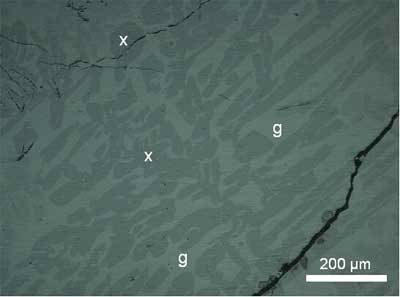 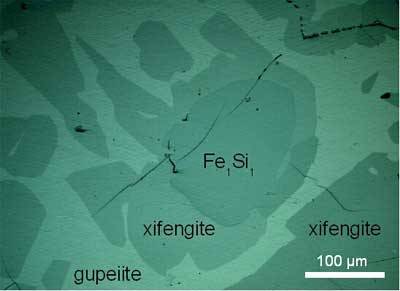 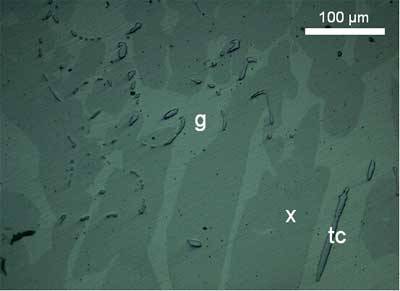 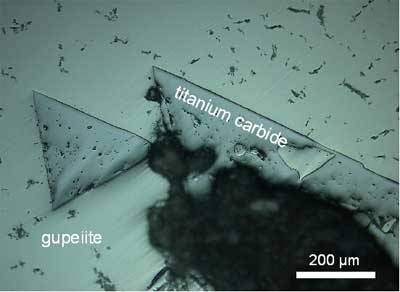 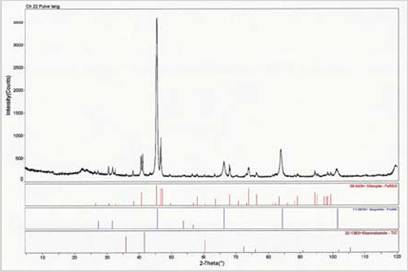