— From detailed echo sounder measurements there is strong evidence of a rimmed doublet meteorite crater structure on the bottom of Lake Chiemsee. The size is roughly 900 m x 500 m, and it is suggested that the impact that produced this structured triggered a tsunami which is documented by sediments in the stratigraphic record around Lake Chiemsee (see here http://www.rhodes.aegean.gr/maa_journal/3_Liritzis%20et%20al.pdf). 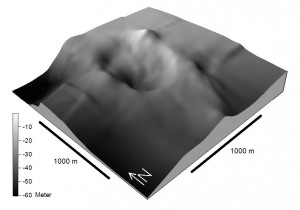 — Obviously by rock or meteorite hunters,  the Hohenwart crater (Fig. 6) has largely been destroyed meanwhile.

Up to now, roughly 100 craters have been identified, measured and catalogued on the basis of topographic mapping, satellite imagery, systematic aerial photography, and time-consuming ground inspection (to be continued in the future). This documentation has established the scattering ellipse shown in Fig. 1. The size of the ellipse is given by a major axis of ca 58 km and a minor axis of ca 27 km. The strewnfield covers an area of about 1,200 km² between 47.8° to 48.4° N and 12.3° to 13.0° E. The craters are situated at altitudes ranging from 362 m to 560 m asl. 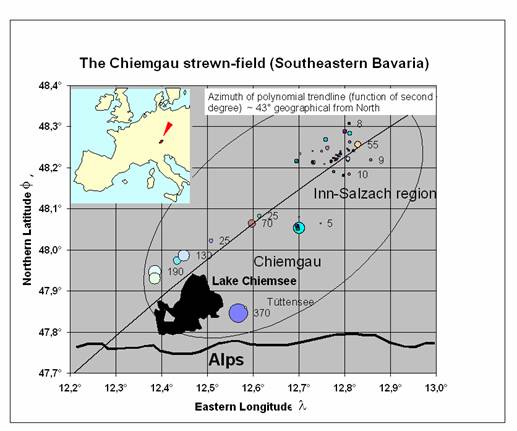 Fig. 1. The scattering ellipse of the crater field in the Chiemgau and Inn-Salzach regions. To give a better view of the distribution of smaller and larger craters in the strewnfield, their sizes have been extended. They therefore don’t follow the true scale of the map. Figures denote the diameters (in m) of some craters.

The preservation of the craters is quite different depending on their location on, e.g., farm land or in forests. On farm land, many of the craters recorded on older topographic maps have meanwhile been leveled out. Despite the leveling, they are frequently visible by satellite imagery or on aerial photographs (Fig. 2). On the other hand, many well-preserved craters are probably if not certainly hidden in forests that cover large areas of the scatter ellipse. These undetected craters as well as craters that have been destroyed and, therefore, are completely unrecognizable, may account for estimated roughly 40 – 50 % of the original number of craters. 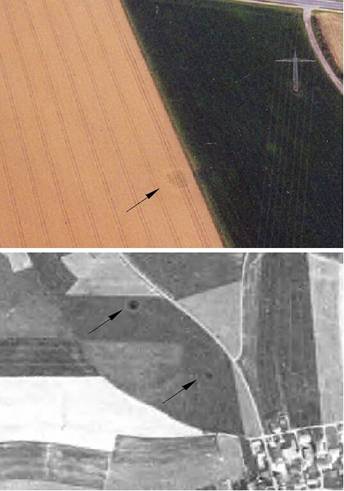 Fig. 2. Craters having been leveled out by farming. Aerial photograph (Gerhard Benske) and satellite imagery (D-SAT).

The diameter of the documented craters ranges between 3 m and several 100 m (Fig. 3 – 8). Some of them are permanently filled with water. There is a large number of craters and depressions having diameters below 3 m. They have so far not been documented, and in many cases the origin of the smaller pits from meteorite impact may be questioned without closer inspection. 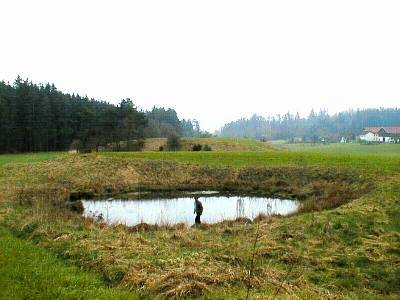 Fig. 3. This crater at Murshall (near Tyrlaching) is permanently filled with water. It is 16 m across and shows a clear wall. 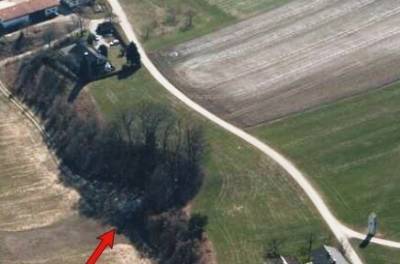 Fig. 4. This 55 m-diameter crater (arrow) is located at an ancient bank of the river Inn near the hamlet Dornitzen (near Marktl). It is preserved only at half. Originally there was a wall meanwhile destroyed by plowing. In the centre of the crater pieces of the peculiar FexSiy-phases have been found. Aerial photo: Gerhard Benske. 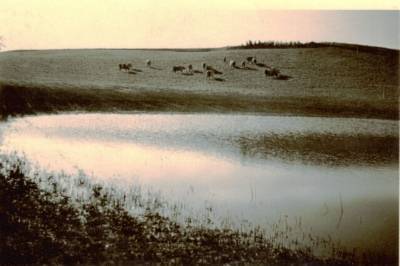 Fig. 5. The crater close to the hamlet Bergham (near Tyrlaching) today has a diameter of about 150 m, a depth of 15 m and a small wall. Before 1960 the hollow hosted a lake. Later it was dewatered and filled up with gravel and soil. Originally the crater had a wall of at least 2 m height. The slope was steep enough and the lake was sufficiently deep (more than 25 m) that children and adults sprang from the rim headlong into the water without any risk. Photo: Mathias Wurm, farmer of Bergham. 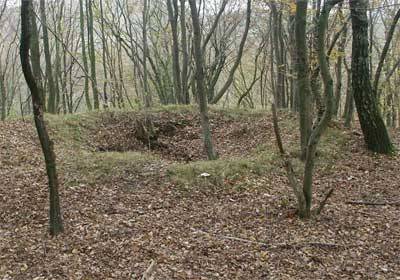 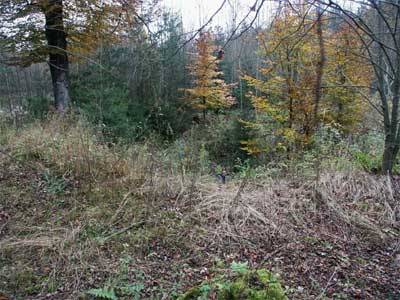 The other end of the scale shows craters having diameters as large as 200 m or more. At present, a lake named Tüttensee and located near the well-known Chiemsee and the town of Traunstein, proves to be the largest crater (Fig. 8). The lake is surrounded by a more or less continuous ring wall and has a maximum diameter of about 400 m. Taking into account the size of the ringwall, a rough diameter of 500 m for the Tüttensee crater may apply. As Fig. 8 shows, the shape is far from being circular, but in parts, the shore matches exactly a circle. We suggest therefore that the Tüttensee was formed by the impact of a fragmented projectile similar to the irregularly shaped craters of the Kaalijarvi and Henbury meteorite crater fields. . 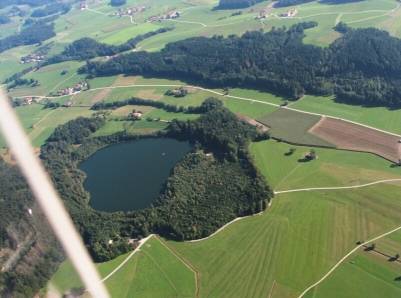 Fig. 8. The hitherto largest crater is the lake Tüttensee close to the hamlet Marwang (near Grabenstätt). The maximum diameter of the water surface measures about 400 m. The originally closed ringwall, today exhibiting some gaps, is about 8 m high. The depth of the lake is given to be between 17 m (official data) and 70 m (according to an unconfirmed plumbing by divers). There may be a significant difference between the depths of the water and of the crater possibly related with a thick layer of organic material. Aerial photo: Gerhard Benske.

In the past, lake Tüttensee has generally been considered a glacial dead-ice moraine. This interpretation is now questioned by new investigations related with the impact event and has led to a strong controversy. Therefore, lake Tüttensee is addressed in more detail in a special section.

With regard to the formation of the Tüttensee crater, we seriously consider the possibility that larger fragments of the impactor fell into the adjacent lake Chiemsee, at that time probably much larger than today. Echo soundings across the large lake establish prominent circular depressions partly surrounded by flat walls.

As for crater structures possibly located in lake Chiemsee and with regard to the large number of hitherto documented objects, we note that it is impossible to unambiguously establish in each case an origin of a crater from meteorite impact. Therefore, while further field work will certainly reveal additional impact craters, some of the hitherto documented craters will, with the same certainty, prove to be not of impact origin.

From Fig. 1 it is evident that the average diameter of the craters increases from the northern end of the strewnfield to its southern end. This is remarkably similar to other meteorite crater strewnfields (Morasko, Henbury, Kaalijarvi, Sikhote Alin) showing a comparable distribution (Fig. 9). Such a distribution is generally assumed to be related with an atmospheric break-up of the impactor implying a rough grading of the fragments and of the diameters of the associated craters. 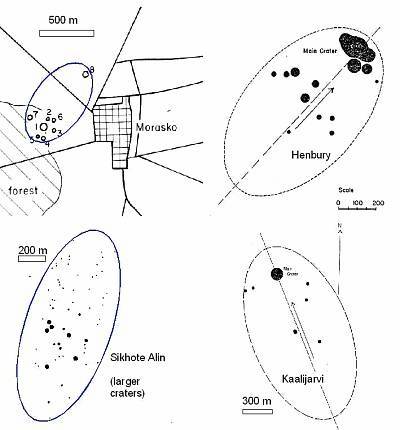 The depths of the craters range between 0.4 m (for the smallest 3 m-diameter craters) and probably a few decameters for the largest lake Tüttensee crater. In Fig. 10, the depths and diameters for 46 fully preserved craters are plotted exhibiting a general increase of the depths with increasing diameters. On average, a diameter-to-depth ratio of r = 6.7 applies. 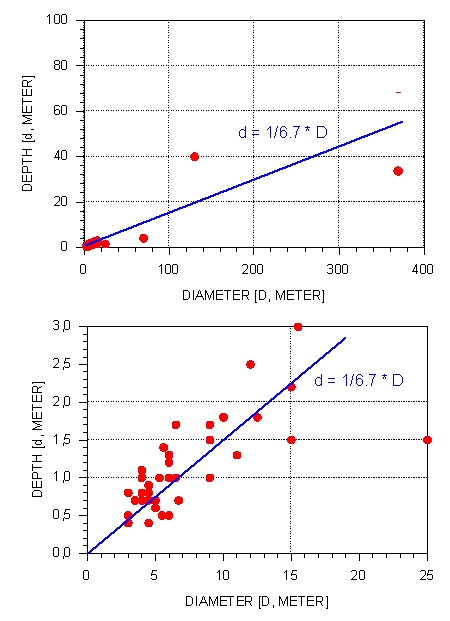