With regard to the mantra-like arguments of critics

— that it is impossible that meteorites other than iron meteorites can produce small craters on the ground (Reimold et. al. 2006),

— that it is utterly out of the question that comet fragments are able to produce a crater strewn field at the Earth’s surface,

— that we are anyhow knowing all about comets [“Cometary matter is unchanged since the formation of our solar system 4,500 Ma” (Jessberger 2005), and “Comets don’t carry >> unknown matter<<” (Jessberger 2006)]

Between 1979 and 2010 five objects having diameters from 150 m to 5 km have been discovered in the asteroid main belt between the orbits of Mars and Jupiter that show comet-like properties. Without significant deviations their orbit corresponds to the asteroid belt. Different from the rest of the asteroids they exhibit the following peculiarities:

Loss of mass indicated by a tail (dust, gas, debris) and, like with comets, depending on the exposition to the sun.

This points to a distinct content of volatiles in the form of ice under diverse cover. A time span of thousands of years for the comet-like behavior is assumed. Since the hydrogen isotopic ration of the terrestrial water is not compatible with the ratio so far measured for comets, it is internationally discussed whether the MBCs may have contributed to the delivery of water to Earth. A formation of the MBCs by collisions in the asteroid belt resulting in a release of ice to the surface is also being discussed.

The most recently discovered object (in January 2010) has a diameter of c. 150 m (light spot at lower left), and a photo was taken by the Hubble telescope: 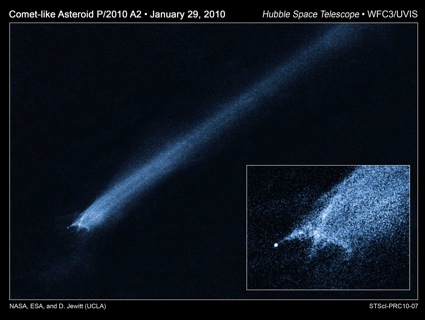 Critics from Berlin (Museum of Natural History, Reimold et al. 2006) claim that according to computer simulations the strewn field of a fragmented meteorite can be very small only, not much more than 1 km wide. Indeed, the crater strewn fields of Kaalijarvi (Estonia), Ilumetsa (Estonia), Morasko (Poland), Sikhote-Alin (Russia), Henbury (Australia), Wabar (Saudi Arabia) are small the half axes being 0,5 – 2 km and up to 1 km, respectively.

Perhaps the computer has not heard of this, but the strewn field of Campo del Cielo (Gran Chaco Gualamba, Chaco, Argentina) comprises 22 small craters at least (diameters from 5 to 103 m, up to 5 m deep) which are distributed over an area of minimum 19 km x 3 km. The recently discovered crater strewn field of Bajada del Diablo (Provincia de Chubut, Patagonia, Argentina) is even larger and measures 27 km x 15 km at least. The c. 100 craters have diameters between 60 m and 500 m and are up to 50 m deep.

These data strongly remind of the Chiemgau meteorite crater strewn field, and the Argentine researchers explicitly refer to the Chiemgau impact and suggest – as does the CIRT – the projectile to have been a loosely bound asteroid (like the 253 Mathilde “rubble pile”) or a fragmented comet nucleus.

Produced by the impact of a stony meteorite: the 13.5 m-diameter Carancas, Peru, impact crater:

Referring to the Chiemgau impact Reimold et al. (2006) declare the impossibility that small craters on the Earth’s surface can be produced by meteorites other than iron meteorites. Only one year later, object lesson was given when in Peru a stony meteorite produced a 13 m-diameter impact crater.

Correspondingly, we read in a first publication of scientists (2008):

“Unlike what it is generally expected, a few tons stony meteorite did not disintegrate in its passage through the atmosphere, but rather it reached the ground with a velocity high enough to produce an impact crater. This event challenges our present view of the fate of meteoroids striking the Earth. The presence of small craters on Earth as well as Mars has to be re-analyzed on the basis of the Carancas event.” [http://www.lpi.usra.edu/meetings/acm2008/pdf/8260.pdf]

A comprehensive article on the Carancas impact has been printed in Meteoritics and Planetary Science (MAPS):

A meteorite crater on Earth formed on September 15, 2007: The Carancas hypervelocity impact

The link to the abstract: