Geophysical measurements play an important role in the research on meteorite craters (impact structures). The unusual pressures, temperatures and mass movements closely related to meteorite impact result in partly drastic changes of the physical properties of the target rocks. These changes correspond to characteristic geophysical anomalies, and many a crater buried deeply in the Earth’s crust have first been discovered by geophysical soundings.

In an earlier geophysical gravity survey at Lake Tüttensee, a peculiar ring of positive gravity anomalies was measured to have possibly resulted from a shock densification [article]. Now, we conducted a new campaign of geophysical measurements in the zone of impact ejecta that have been encountered in more than 30 excavation pits around Lake Tüttensee. 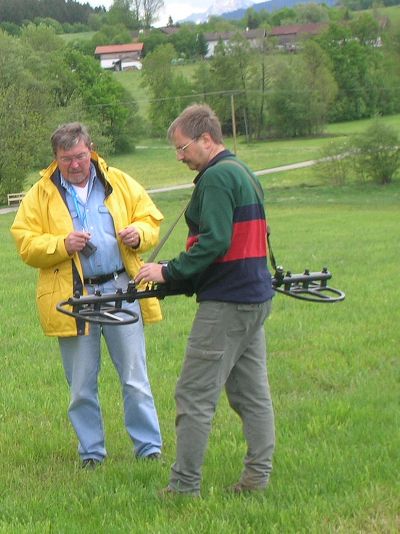 Fig. 1. Klaus Ebinger (to the left), owner of the EBINGER company, during the Tüttensee crater geophysical campaign. 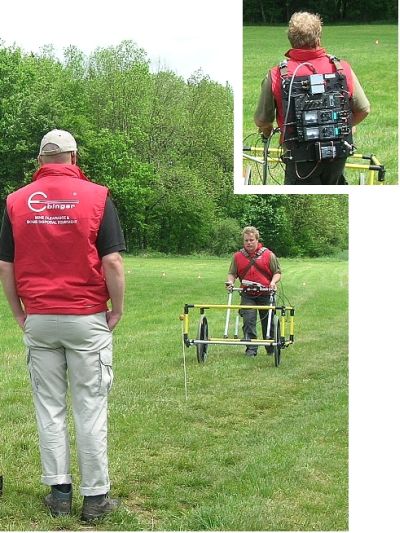 The geophysical survey comprised pulse (TEM) and frequency (FEM) electromagnetic soundings, and the primary objective was an area-wide investigation of the impact-related geological underground und its peculiarities so far only known from selective excavations around Lake Tüttensee.

The campaign was generously supported by the EBINGER company (Cologne) [Ebinger Prüf- und Ortungstechnik GmbH], a worldwide operating producer of high-tech search and detection equipment (Fig. 1). The EBINGER products are applied to various fields like unexploded ordnance (UXO) disposal both by sea and by land, safety engineering, environmental geophysics, industry and research, and in this particular case the EBINGER company in a three-day campaign (Fig. 2) supported at no charge the research of the Chiemgau Impact Research Team (CIRT).

From that campaign, Fig. 3 shows an example of processed pulse-electromagnetic (TEM) data sampled on an area of 150 x 100 m². The map exhibits conspicuous resistivity contours that, however, need further interpretation. 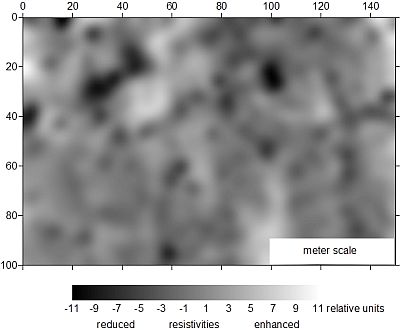 In the environs of the Tüttensee crater (Chiemgau Holocene impact event), a new campaign of geological and geophysical investigations has been performed also including new excavation pits (now totaling 37).

In the excavation pits, the stratigraphy well known from earlier excavations [http://www.chiemgau-impact.com/artikel2.pdf] has again been encountered (top down):

The ejecta layer exhibits the well-known composition of crushed, yet abundantly coherent clasts and the frequently strongly corroded skeletal carbonate and silicate cobbles and boulders in a clayey matrix (Fig. 1). 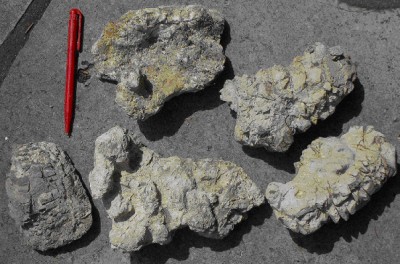 Fig. 1. Typical, strongly wrecked cobbles from the Tüttensee impact layer in excavation pit No. 35. Together with these cobbles the quartzite artifact (Fig. 2) was recovered. As noted in previous articles, the sharp-edged fracturing can only have originated from impact deformation, and the extreme corrosion of the clasts can be explained by impact nitric-acid dissolution and/or carbonate decarbonization/melting.

As a peculiarity in the Bunte breccia ejecta layer of excavation pit No. 35, about 900 m east of Lake Tüttensee, a broken white quartzite boulder was recovered that

has clearly been elaborated by man (Figs. 2, 3). A funnel-shaped “picked” dent passes over into a drilled hole that breaks off midway through the boulder. A central rise at the base of the hole (Fig. 3) proves it was drilled with a hollow rod, possibly a hollow bone. 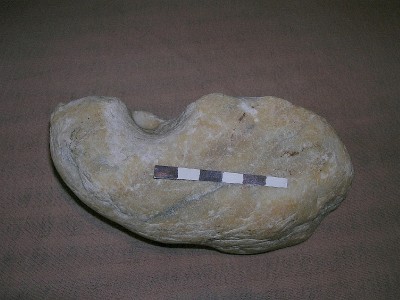 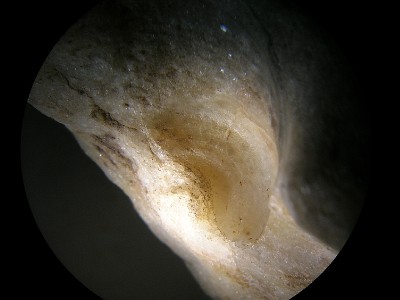 Fig. 3. Close-up of the bore. The central rise at the base proves the use of a hollow rod, possibly a hollow bone.

It is well known that artifacts were produced from impactites and impact glasses, resp., (e.g., Elgygytgin impact structure [Gurov & Gozhic, 2006, Impact Cratering in the Earth’s History, in Russian], Libyan Desert glass, tektites). Here, in the Tüttensee case, obviously the first find of an artifact in an impact rock is documented.

The full article on this find can be clicked here.

Repeatedly, the Tüttensee ejecta layer has served for the Weekly Images, which can be tracked in the Archives of this website. Now, we present several especially beautiful individual components after having released them from the clayey matrix of this polymictic breccia. As for the term “breccia”, we note that according to current

classification a breccia is a clastic sedimentary rock composed of angular clasts in a cementing matrix. The rounded clasts encountered in the Bunte breccia seem to contradict this definition, the case, however, is to be comprehended as follows: Upon impact in the area of the today’s Tüttensee, a conglomeratic rock composed of Alpine lithologies was shattered whereby components of the fragmentation could survive as rounded cobbles to become incorporated in the breccia. Correspondingly, well-rounded clasts can be found within the Bunte breccia ejecta of the Nördlinger Ries impact structure (e.g., the so-called Buchberg cobbles). 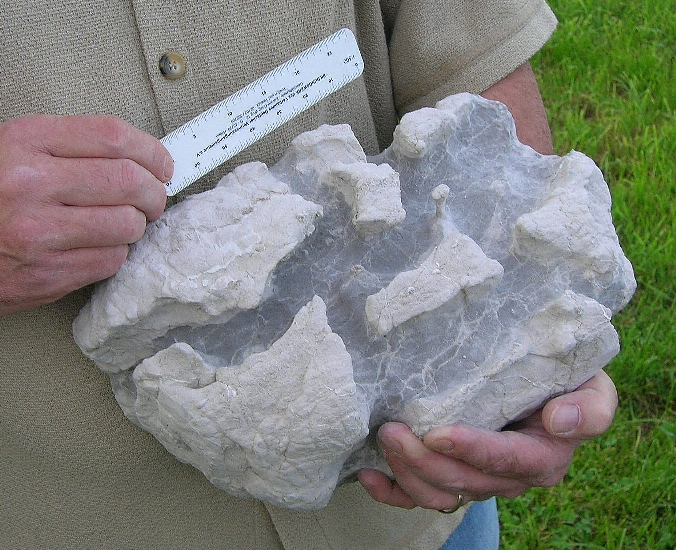 The here presented cobbles and boulders from the Tüttensee Bunte breccia stand out to have still more experienced. We explain the deep-reaching corrosion and rock dissolution right up to skeletal formation by the action of high temperatures or/and the action of strong acid dissolution.

The voluminous boulder in Image 1 is a limestone that because of its peculiar sculpture can impossibly have come from the Alps as is (note, e.g., the roughly central fine pin). Obviously, a noticeable part of the rock has been removed, and that did not happen by fracture. Instead, we suggest high temperatures in the impact process being able to melt a limestone or, like in lime works, to decarbonize it. We also consider a dissolution by nitric acid that may be produced in the impact explosion cloud, as previously discussed here on our website. Both processes heat and acid need not be mutually exclusive. 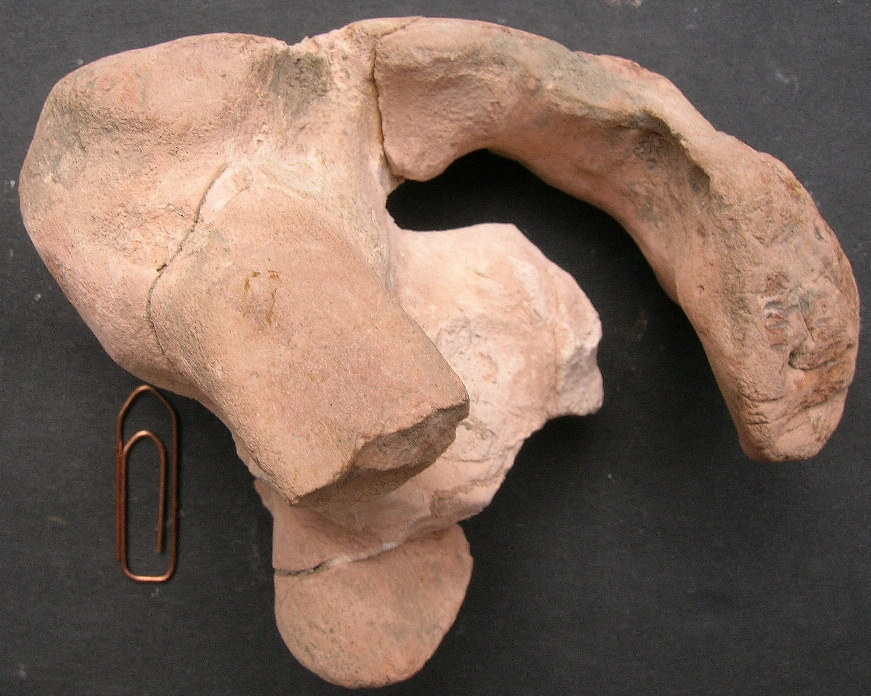 Image 2 shows a sandstone component from the Bunte breccia already, joking,  called a saurian embryo. For the formation of this “sculpture” we can refer to the same processes of destruction. If the quartz grains of the sandstone are carbonate-cemented then on action of temperature and/or acid a deep-reaching corrosion starts. On decreasing temperature and acidity rock skeletons as shown may remain. 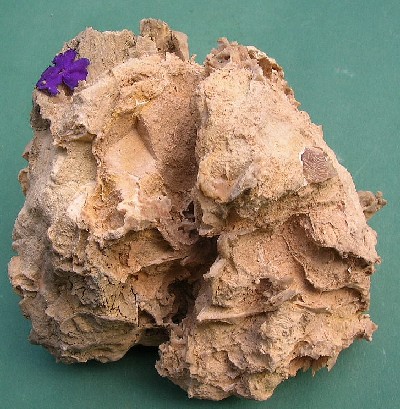 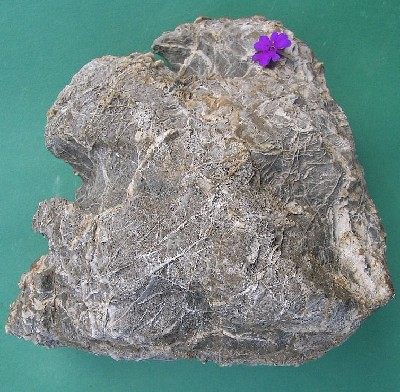 We would like to once more point out that the drastic rock modifications shown here are observed with clasts that are constituent part of a rock, namely the Bunte breccia. Recently, geologists of the Bavarian Geological Survey (now Landesamt für Umwelt) have explained the deep-reaching skeletal corrosion of clasts from the impact layer by sour soils, which we don’t want to comment any further. 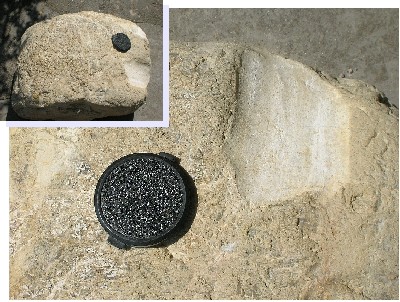 The clast shown in Image 5 also originates from the Tüttensee impact layer. It was encountered at some 1.5 m depth at the base of the Bunte breccia pushed-in in the fossil soil horizon underneath. The boulder is a hard, dense quartzite and exhibits distinct abrasions all around. Not any striations can be observed on the surface of the rock, and the imprints cannot possibly have originated from glacial abrasion – in order to preclude respective objections by deniers of the Chiemgau impact. The directional imprints are smooth suggesting a plastic, if only short, behavior (like a pulp) of the quartzite material. Within the frame of our model that defines the Bunte breccia to be ejecta from the Tüttensee crater, the boulder underwent the excavation of the growing crater initiated by extreme shock pressures following the impact into the target of Alpine material. During this high-pressure phase, the boulder became plastically deformed by neighboring clasts was ejected and landed on the (at present fossil) soil at the base of the developing Bunte breccia ejecta horizon. 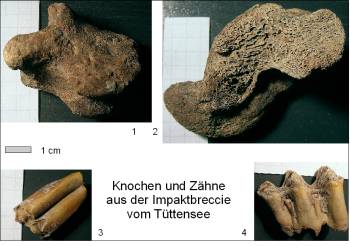 In numerous excavation pits around Lake Tüttensee, a polymictic breccia layer has been encountered to be probably impact ejecta from the Tüttensee crater  ( http://chiemgau-impakt.de/ATT00007.pdf ). In a clayey matrix, the breccia contains multicolored rock fragments exhibiting shock-metamorphic effects (http://chiemgau-impakt.de/bdw3.pdf ), and is rich in organic material like wood and charcoal. Moreover, bones, bone fragments and teeth were found in the breccia from four excavation pits. Meantime, for two bones and two teeth a more accurate determination has been performed by Dr. M. Mäuser, director of the Naturkundemuseum (Museum of Natural History) in Bamberg.

Bone 1 (excavation 11; image 1) is a cattle’s second phalange (toe bone). Bone 2 (excavation pit 11, image 2) belongs to the left astragalus (talus bone of the ankle) of a deer, probably a red deer (possibly a fallow deer). Tooth 1 (excavation 25, image 3) is an upper-jaw molar of a goatish (Caprinae). Caprinae include sheep and chamois but also goats and the ibex (capricorn). The size of the molar speaks in favor of a sheep or an ibex. Tooth 2 (excavation 25, image 4) probably is a Caprinae milk premolar.

It is left to assumptions whether the animals perished on impact or whether the skeletons existed already and were smashed and intermixed in the impact breccia. Sheep and cattle may have been domestic animals 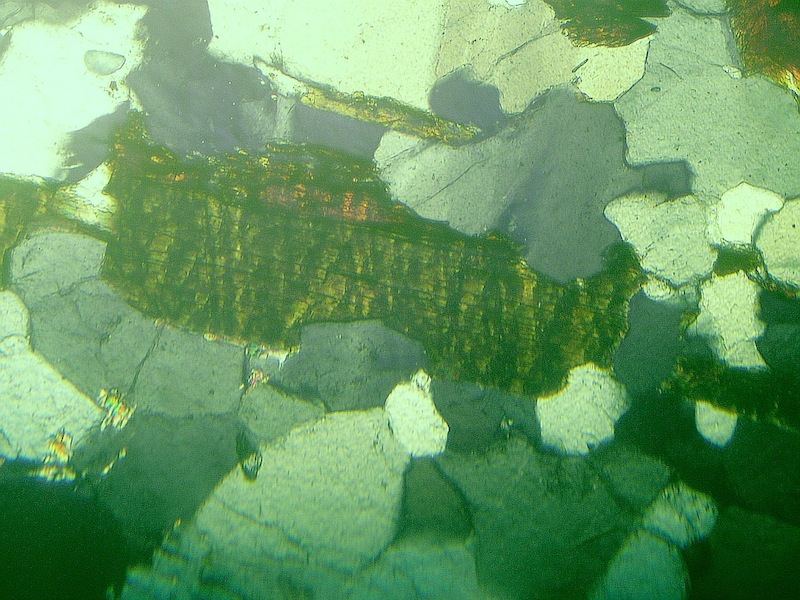 Numerous excavation pits have been performed in the surroundings of Lake Tüttensee that is proposed to have formed as a meteorite crater in the Chiemgau impact event. The excavation pits have revealed the existence of a more or less continuous ejecta blanket around the lake, and the peculiarities of the layer have already been described:http://www.chiemgau-impakt.de/ATT00007.pdf, http://www.chiemgau-impakt.de/Seiten%201-10.pdf (part 1) and http://www.chiemgau-impakt.de/Seiten%2011-26.pdf (part 2). Now, samples (from crystalline and sedimentary Alpine cobbles) were selectively taken from this ejecta layer in order to systematically analyze them for shock effects, for the time being under the optical microscope only. The study of thin sections from 31 rock samples taken from 7 different excavations establishes a rich inventory of mineral deformations that with reasonable certainty or with great likeliness have originated from shock load. The photomicrographs (crossed polarizers) show planar deformation features (PDFs) in quartz from a mica quartzite (upper) and two sets of extremely closely spaced kink bands in biotite from a gneiss (lower). A more comprehensive report including 17 photomicrographs (in German with English abstract and figure captions) may be clicked HERE. 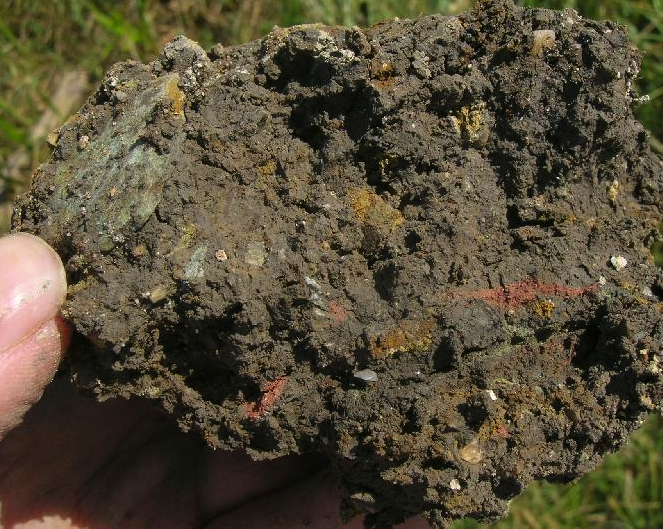 Apart from the suevite the ejecta blanket of the Ries impact structure (Germany) is composed of the so-called Bunte (= multicolored) breccia (clast size < 25 m) and allochthonous megablocks (coherent clasts  > 25 m). The distinction has been made for mapping reasons but otherwise is arbitrary. The term “Bunte” refers to the many colors (black Jurassic claystones, white Malmian limestones, purple and greenish Keuper sandstones and claystones, various crystalline rocks) that on intensive mixture of the components cause the multicolored appearance of the breccia. New excavation pits at Lake Tüttensee (Chiemgau impact event) have encountered a “Bunte breccia” (the image shown here) very similar to its namesake of the Ries impact crater. The probable similar formation of the breccias (as impact ejecta) is especially evident when the Tüttensee breccia is compared with the small-grained clayey Ries breccia. A preliminary short report (in German with English abstract and figure captions) on the new excavation results may be clicked HERE.