Well known among people around Lake Chiemsee, peculiarly sculptured limestone cobbles (Figs. 1 – 4) found at the shore and offshore at the lake bottom attracted special attention when Lake Chiemsee got into the focus of the meteorite strewn field impact research. Although most people are considering the groove cobbles no more than a freak of nature, the work of organisms, especially of mussels has always been suggested. 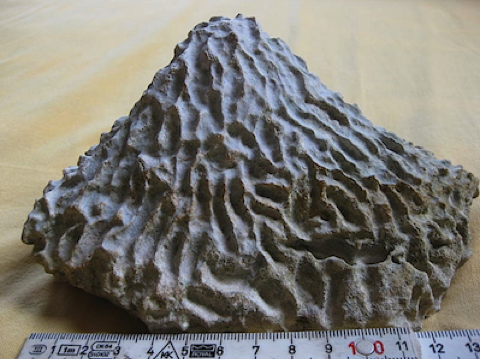 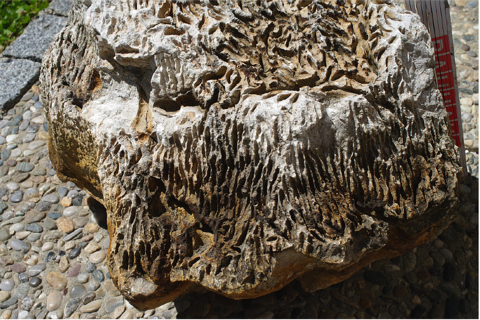 Fig. 3. Big grooved limestone block from the Lake Chiemsee shore. Note the distinctly parallel, knife-edge ridges between the grooves (in the same orientation found all around the block) hardly compatible with the work of organisms. 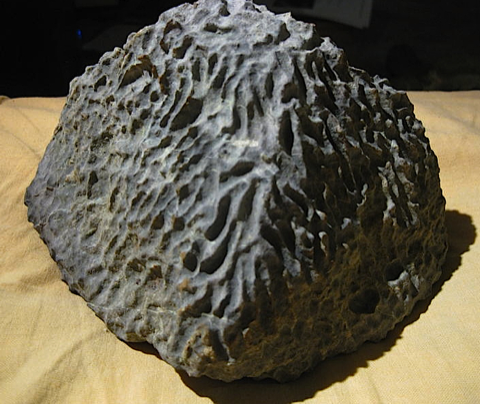 Fig. 4. Pyramidally shaped groove stone. Note the geometrically orientated groves. Photo courtesy of H. Eberle.An impact-related formation came to the fore comparing the typical groove features with ablation features (regmaglypts) that meteorites may acquire when exposed to frictional heat on their passage through the Earth’s atmosphere. Moreover, an amazing similarity between the groove cobbles and regmaglyptic boulders from the Puerto Mínguez impact ejecta of the Spanish large Rubielos de la Cérida impact structure (Figs. 5, 6; also see the respective article: http://www.impact-structures.com/article%20text.pdf) exists. When we suggested that the cobble grooves were formed in the Chiemgau impact event as ablation features having developed by decarbonization and carbonate melting upon ejection and heating in a jet of super-heated volatiles, immediate reactions of local geologists ensued.

As later adopted by the local geologist Dr. Robert Darga, Dr. Robert Huber from the university of Bremen rejected the impact model of groove formation and instead seized again on the old explanation of the work of organisms, especially of bacteria and algae. He underlined his belief claiming that the same groove cobbles are a common feature in many lakes in the Alpine Forelands, Lake Constance included – see his blog contribution http://stratigraphynet.blogspot.com/2008_06_01_archive.html. We encourage you to read his remarks and to especially enlarge the photos in Dr. Huber’s blog comparing them with our photos from Figs. 1-4. It’s like comparing apples to oranges. And until today, Dr. Robert Huber fails to present groove cobbles like those shown in our figures from lakes other than Lake Chiemsee.

Of course, biogenic rock sculpture produced by organisms like, e.g., endolithic bacteria or piddocks is a well-known process, but once more, we must not compare apples to oranges, and obviously Dr. Huber has come to a deadlock.

There are very simple macroscopic observations proving the inorganic formation of the grooves. As shown in many of our photos, the grooved cobbles frequently exhibit distinct conical and pyramidal shape while the grooves, in most cases showing extremely sharp, knife-like edges, are geometrically related with the cones and pyramids. It’s exactly the same observation we are making with the regmaglyptic stones from the Rubielos de la Cérida impact ejecta (Figs. 5, 6). If the grooves were produced by organisms, these bacteria, algae and mussels must have had extraordinary intelligence, organization and communication capabilities to geometrically sculpture a large block as seen, e.g., in Fig. 3. Moreover, the identically grooved stones from the Spanish impact ejecta have never seen a lake, as can be read in more detail in the article referred to above.

In summary, a biogenic origin of the unmistakable, distinctly grooved cobbles from Lake Chiemsee has not any reasonable base. Instead, all features, the frequently conical and pyramidal orientations included, point to an erosion process initiating ablation due to decarbonization and melting.

Meanwhile, new finds of quite a few grooved cobbles (among them also grooved sandstones) substantiate the impact-related formation and, moreover, give highlighting insight into the unique process of deposition of the cobbles after having acquired their sculpture. We will report soon. 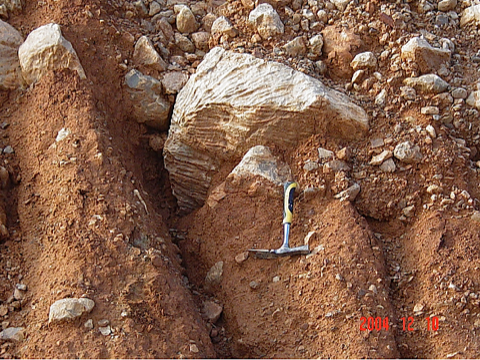 Fig. 5. Big grooved limestone clast embedded in the diamictic impact ejecta of the Rubielos de la Cérida impact structure in Spain. Note the pyramidal shape and the grooves diverging from the top of the pyramid. 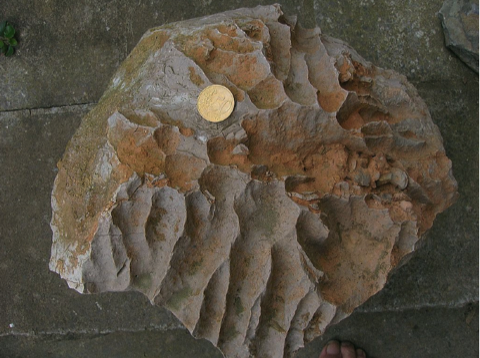