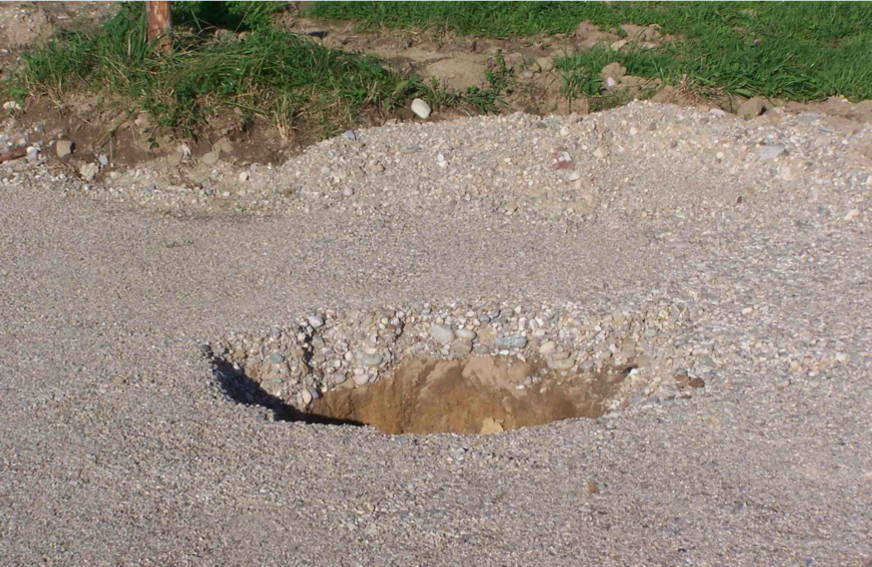 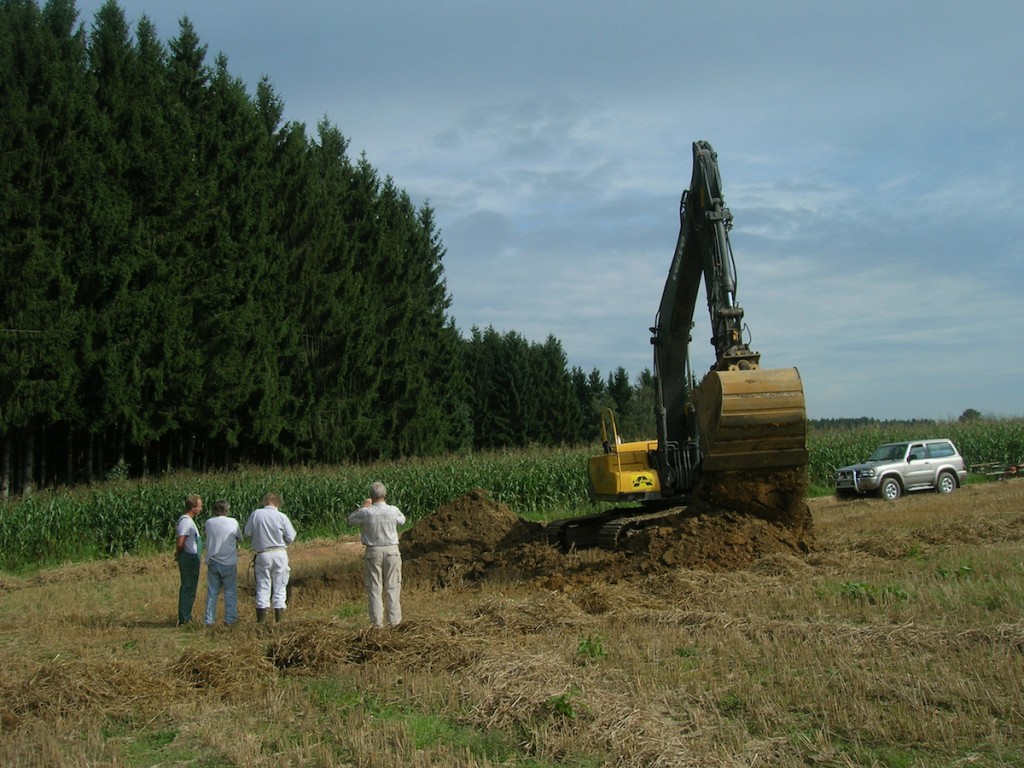 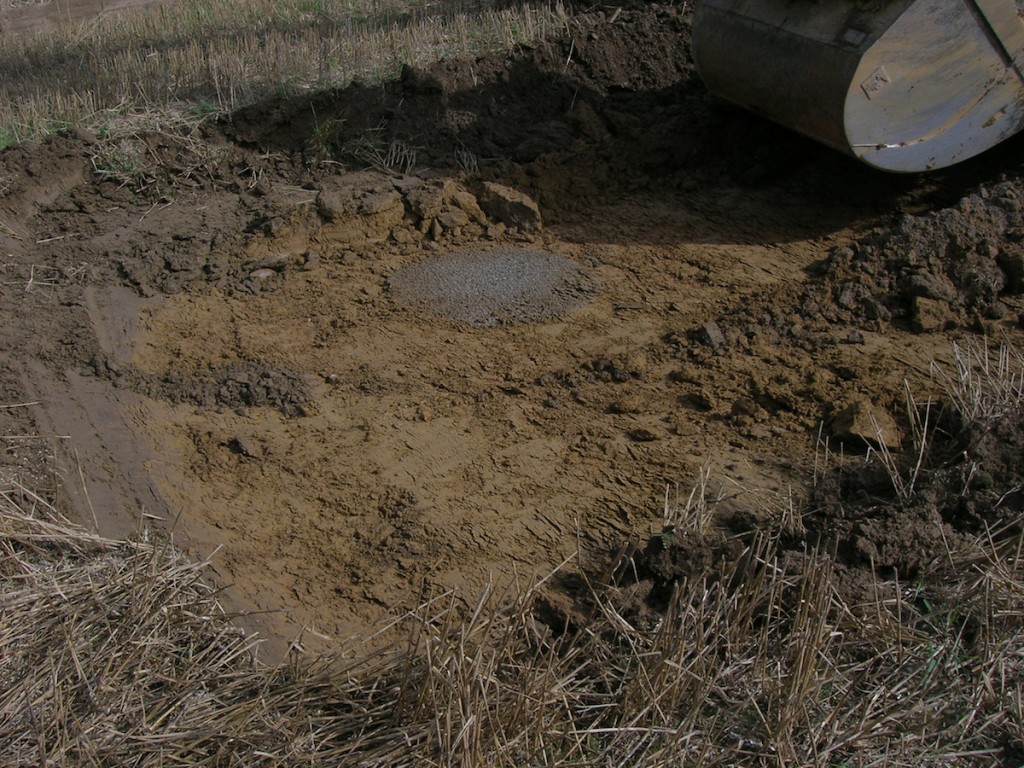 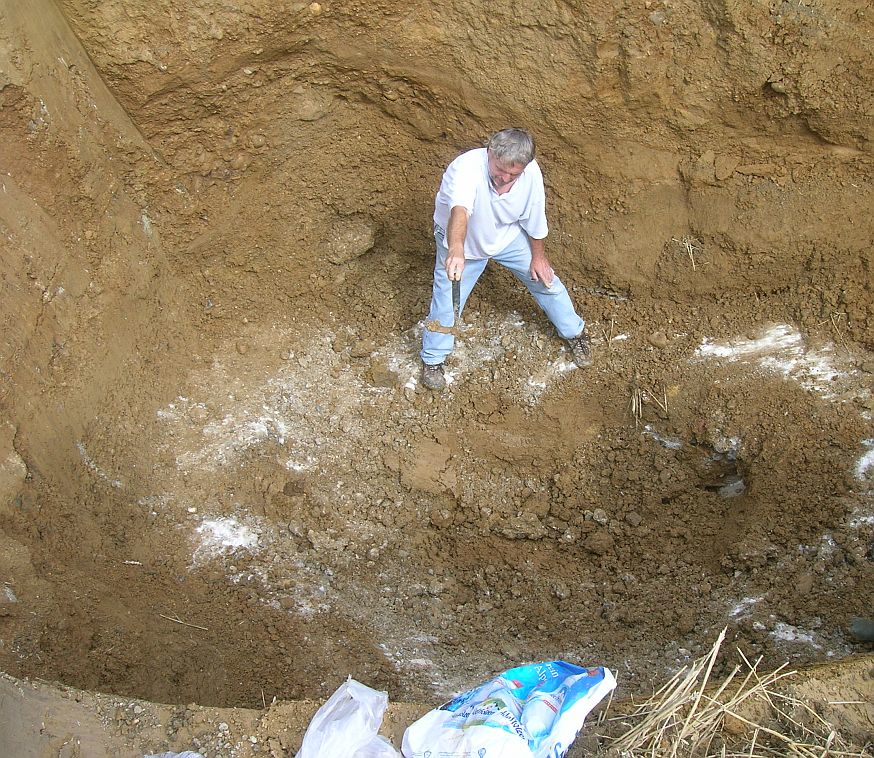 The excavated sinkhole #1 exhibiting the perforated Nagelfluh plate. Nagelfluh denotes a strongly cemented, concrete-like conglomerate. The perforation has been the result of  shock-induced rock (soil) liquefaction and explosive discharge upwards. The white color   originates from scratches of the excavator that was unable to penetrate the Nagelfluh plate. 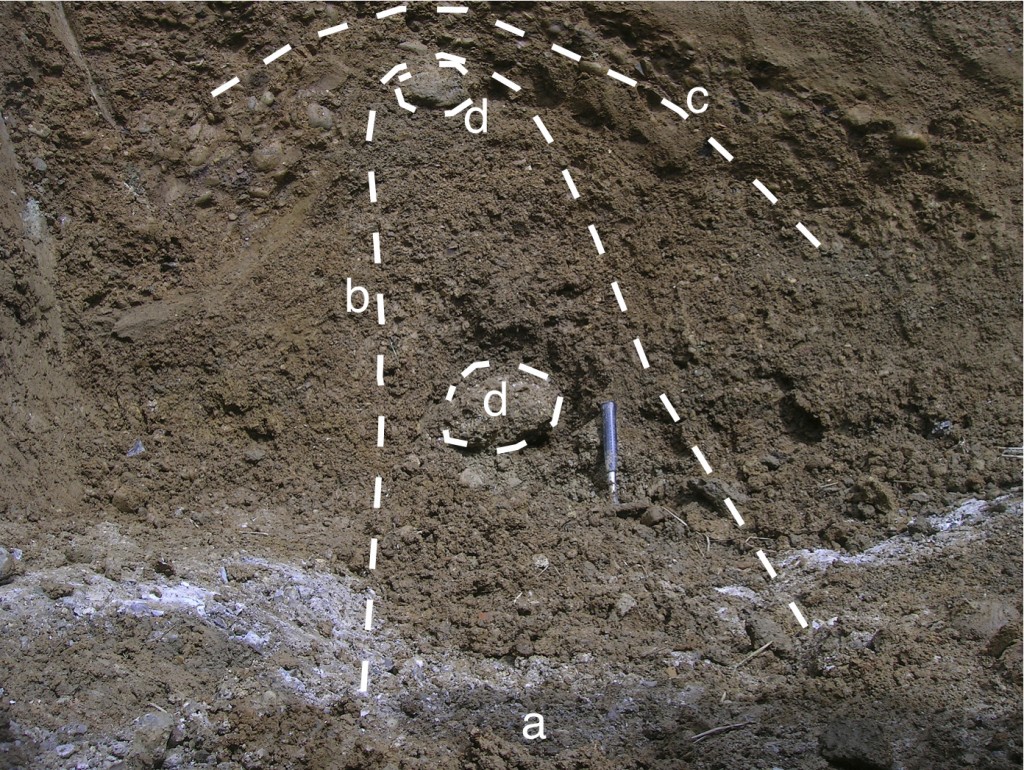 Geological excavation of sinkhole #1 demonstrating the heavy shock from below. a = Nagelfluh perforation; b = intrusion of sandy-gravelly material; c= updoming of the overburden. Rock (soil) liquefaction in the Chiemgau impact event. 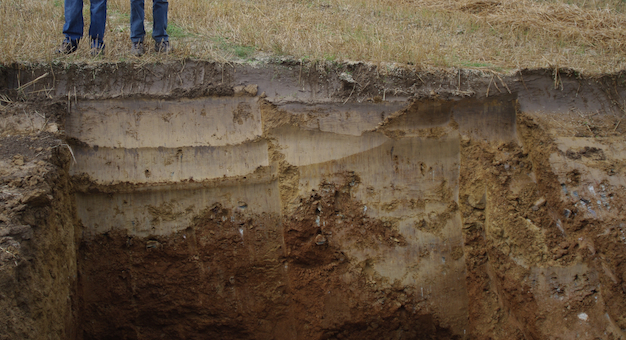 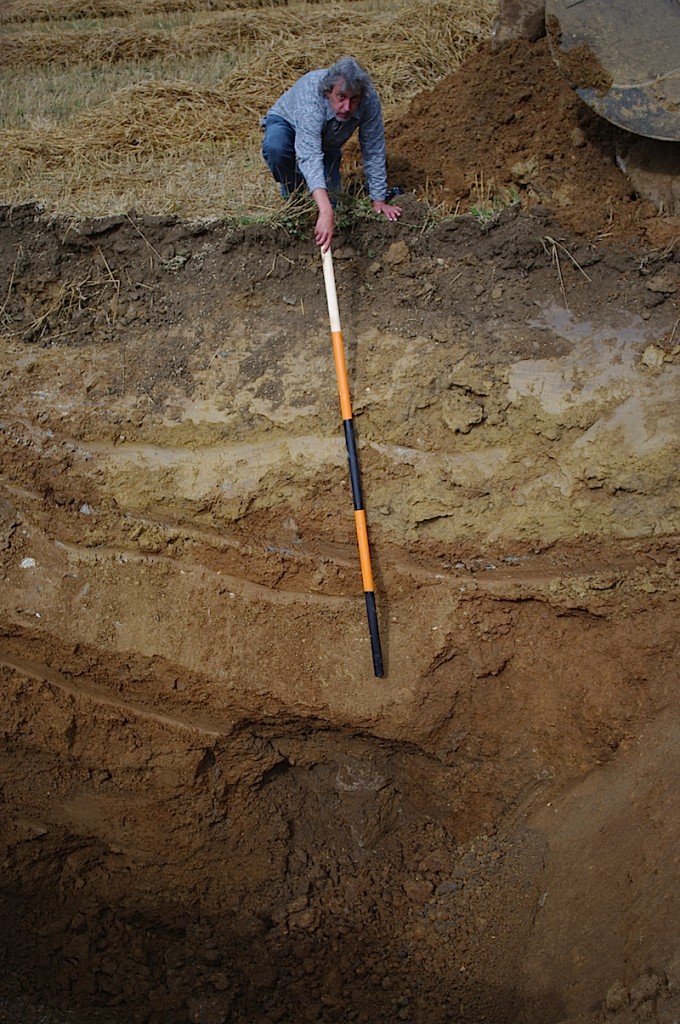 Nagelfluh blocks weighting up to several 100 kg that were uplifted up to 1 m by the shock-induced rock liquefaction discharge. Rock (soil) liquefaction in the Chiemgau impact event.

Mörn farmhouse near Kienberg. a = location of an active depression probably preceding a coming Thunderhole collapse. Here, geophysical measurements (complex geoelectrics, resistivity and induced polarization electrical imaging) have been performed. b: According to the owners of the Mörn farmhouse this pool originally consisted of two circular small basins. We suspect that they were related also with the Chiemgau impact rock liquefaction and originated from an explosive discharge (sand explosion, sand boil) well known to occur with very strong earthquakes (e.g. with the 1811/1812 New Madrid earthquake in the USA). 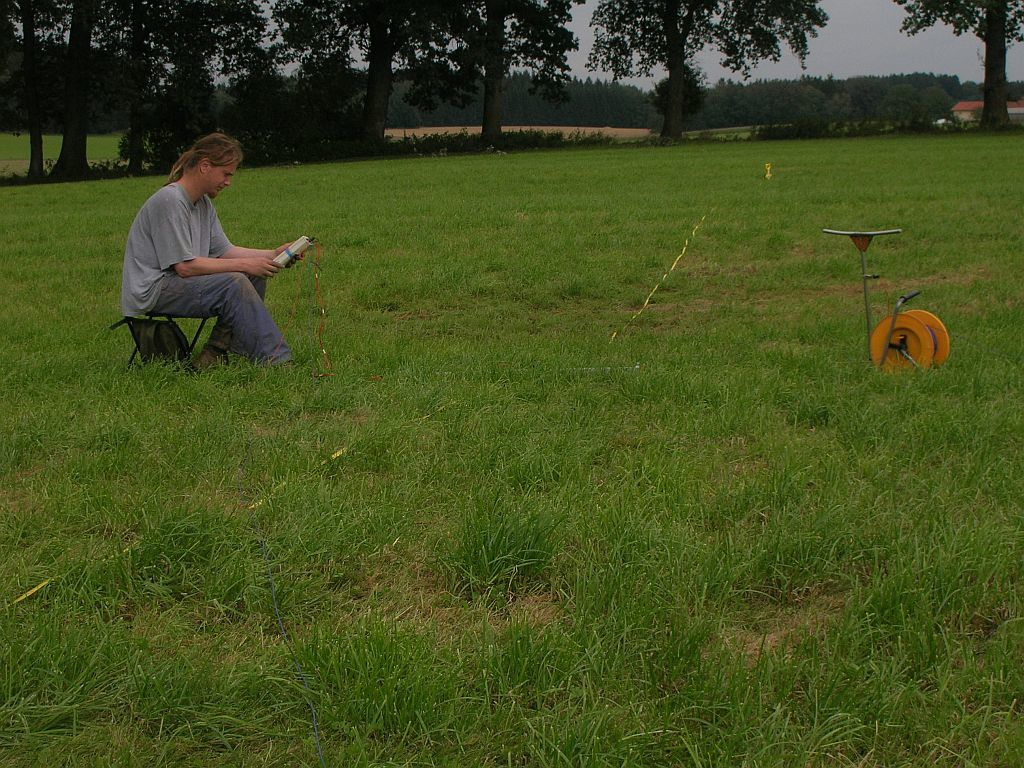 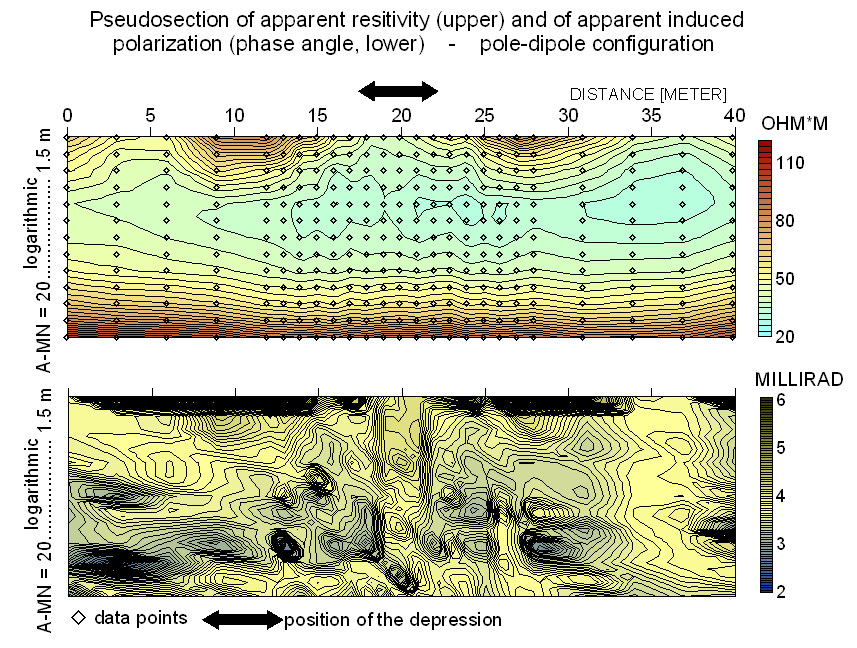 Electrical imaging profile over the active depression at the Mörn farmhouse. Resistivity and Induced Polarization (IP) pseudosections. Note the clear signature of the intrusions from below seen in the IP section. In many cases IP proves to supply a much better resolution of underground structures compared with resistivity.