The Chieming-Stöttham archeological excavation – comments on a recently published article

Abstract: – At the behest of the Bavarian State Office for Monument Preservation (BLfD) the archeological excavation at Stöttham near Lake Chiemsee, which exposed an intercalated geological layer with all evidence of a catastrophic deposition in a meteoritical impact event, was accompanied by a study performed by Wissenschaftszentrum Weihenstephan für Ernährung, Landnutzung und Umwelt der Technischen Universität München [Science Center of Nutrition, Land Use and Environment, Technical University of Munich, at Weihenstephan]. In the now published article the exposure is most widely described and interpreted from a geomorphological and soil science perspective while the unambiguous impact features implying the typical heavy rock deformations and shock metamorphism (shock effects) are completely ignored. Nevertheless, the authors conclude that there are not any indications of an impact event. Here, we remind of the progress of events, discuss the major shortcomings of Völkel et al.’s article, and conclude that it doesn’t meet scientific requirements.

In the year of 2007, in the course of excavations for a house construction in the town of Chieming-Stöttham an accompanying archeological dig was performed (Möslein 2009). During the work of a private archeological company a CIRT co-worker (W. Mayer) who coincidentally attended the excavation discovered a very conspicuous intercalated layer (Fig. 1) that up to that time had not attracted the attention of the digging archeologist. W. Mayer, an experienced local history researcher and amateur archeologist, rapidly realized the peculiarity of the deposit that not at all matched the archeological context (Fig. 2), and he at once initiated a thorough geoscientific investigation and documentation by geologists, geomorphologists/pedologists linked with the CIRT. As early as in September 2008 a report on that work (Neumair 2008) was presented to the municipality of Chieming. Later, more publications relating to the excavation followed (Neumair et al. 2010, Ernstson et al. 2010, Rappenglück et al. 2010, Liritzis et al 2010).

While initially there was a good understanding between the digging archeologist and the CIRT researchers communication came to an end suddenly, and from this time on the archeological excavations continued without any geological guidance.

In 2008, at the behest of the Bavarian State Office for Monument Preservation (BLfD), the archeological excavation at Stöttham was accompanied by an investigation performed by Wissenschaftszentrum Weihenstephan für Ernährung, Landnutzung und Umwelt der Technischen Universität München [Science Center of Nutrition, Land Use and Environment, Technical University of Munich, at Weihenstephan].

Fig. 1. The impact layer photographed in the course of the archeological excavation. 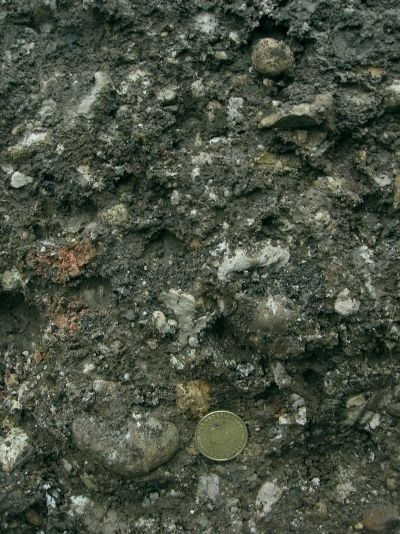 Fig 2. Close-up of the diamictite shown in Fig. 1. Note the completely unsorted, multicolored mixture of cobbles and sharp-edged, for the most part intensively fractured components. The interpretation of this layer by Völkel et al (2012) as contributing to a more or less continuous colluvial deposition into a Holocene channel defies description.

The field work with sampling of the Völkel group spanned a few days. During this time researchers of the CIRT group executed own investigations on the ground; however, against all good practice in science, Völkel et al. evaded any discussion of the geological setting and the postulated Chiemgau impact event.

The work of the Völkel group also comprised a campaign of geoelectrical measurements. An electrical-imaging resistivity mapping was executed immediately at the scarp of the excavation thereby crossing piles of overburden. The hint of the CIRT geophysicist that such a procedure would not make sense methodically and that it would lead to meaningless results was ignored by the soil scientists. The results have not been revealed to us; in the article of Völkel et al. (2012) the measurements are not mentioned at all.

3 The impact layer according to the study of the CIRT

From the investigations of geology, petrography and impact research the catastrophic layer proves to be composed of rounded, heavily shattered and extremely corroded cobbles (Figs. 3, 4) in a clayey-silty, slightly sandy matrix. Intermixed we found splintered wood, charcoal, fractured bones and teeth, damaged archeological objects, among them abundant shards, and glass and carbonaceous spherules (Fig. 6). High temperatures are indicated by heated rocks, strongly heated “golden” mica (Fig. 5) as well as partly fused silica limestone (Fig. 7) which is a well-known alpine rock.

Sandstone fragments with shock melt (Figs. 10, 11) exhibit signs of  shock effects (shock metamorphism) (Figs. 8, 9). Diaplectic glass in a quartzite cobble having required high shock levels, and related questions regarding the OSL dating of the Stöttham deposit have been discussed in Liritzis et al. (2010). 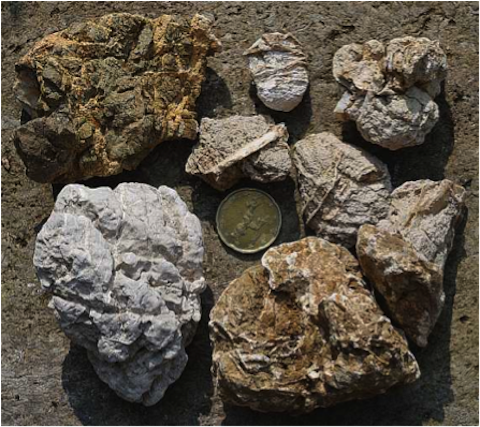 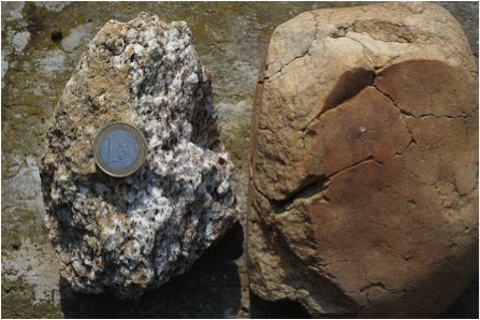 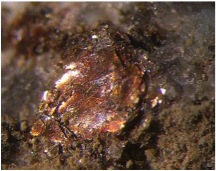 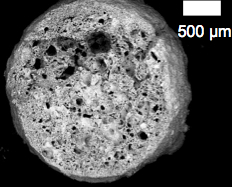 Fig. 6. SEM image of a broken glass spherule from the Stöttham diamictite. 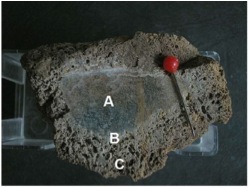 Fig. 7. Cut end of a silica limestone from the Stöttham diamictite melted all around

Fig. 11. Glass from shock melt – black under xx nicols of the polarization microscope.

Diamictites may be formed in quite a few geological processes as referred to, e.g., in Neumair et al. (2010). However, by the current state of scientific knowledge findings as met in the exposure of the Stöttham excavation are compatible only with the effects of a meteorite impact event.

4 The impact layer at Stöttham and the article of Völkel et al.

As can easily be seen in the article of Völkel et al (2012) and is already understood from the article’s abstract the authors most widely intend to use their investigations to disprove the postulated impact and its effects in the region of Chieming-Stöttham. In the first place we would expect that the most essential publications written by the advocates of the impact which can all be downloaded in the web without any efforts are referred to. This is not the case. The omission of publications, for example the work of Neumair et al. (2010) explicitly addressing Stöttham, and especially the concealment of the very comprehensive article on the Chiemgau impact (Ernstson et al. 2010) is rather poor scientific style.

All in all, the work of Völkel et al. has a purely geomorphological-pedological character only rudimentarily trying to exercise interdisciplinary consideration (e.g., geology, archeology). As a consequence misinterpretations result and questionable conclusions are drawn. An example is the chemical analysis most widely going without carbonate determination in the soil and at the same time handling carbon content as organic matter without consideration of the actual layering. We are further finding fault with “true” organic matter like heavily demolished teeth and bone remnants far from being adequately described. Table 1 misleads the reader since the samples are sorted by depth only, although they originate from completely different profiles which moreover are not adequately illustrated. Furthermore, the  description of the samples’ fine fraction ignores spherules and other constituents not exactly typical here which have already been documented in the literature possibly ignored by the authors.

And we are puzzled by the scenario as described by Völkel et al. with regard to the paving without any reasonable foundation (a road?) that was excavated in the outcrop. How should one understand that some 2,000 years ago this construction was used over 1,000 years without problems and very next (!) to it there was a continuous undisturbed deposition of soil material?

However, we specifically want to point out that Völkel et al. have investigated exclusively the Stöttham outcrop measuring 300 m2 at best. Any integration into a spatial context is lacking. But at the same time when negating the impact the authors state their position on a much bigger space. This corresponds to a common practice, that is looking at individual locations without considering the big picture and without integrating and balancing all existing phenomena.

The article of Völkel et al. proves a viewpoint of the situation at the Stöttham excavation by geomorphologists/soil scientists who did not understand the geological “content” of the exposure or who did not regard it very deliberately. In particular, this concerns the unmissable features of a geological diamictite and, moreover, the existence of extreme destruction, extreme temperatures and extreme pressures implying proven shock effects. We do not know whether the authors have ever worked on impact geology or impact phenomena in general. We don’t blame them for it. However, we severely reproach them with the fact that they did not even bother to make use of the knowledge and experience which they are lacking and which is abundant in the CIRT research group. Instead, from this limited point of view they are claiming opinions that are not tenable even on a rapid examination. We conclude that the work and article of Völkel et al. (2012) don’t meet scientific requirements.